Found these guys, 4 of them, crawling around on top of my trash can. Haven’t seen ‘em before. 6 legs, orange, spotted on the back, no pincers, long thin “tail” or stinger. Very aggressive.
Ideas?
Thanks
Ben in Austin 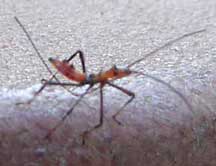 Hi Ben,
We got a second opinion from Eric before writing back to you. He agrees that it is probably an Assassin Nymph. He writes: “Sure. Reminds me of a Zelus sp. of assassin, but photo is not detailed enough to rule out coreids, which would be my other guess:-)”

Correction:  April 27, 2013
Thanks to a comment from Dan, we now know that this is more likely a Leaf Footed Bug nymph.