Subject: stung by wasp
Location: Atenas, Costa Rica (central valley)
December 23, 2012 12:01 pm
I think it’s some type of wasp anyway. This stung me on the ankle twice in rapid succession while I was in a hammock. Felt like a very bad wasp sting that initially burned for at least an hour, but it’s still swollen, red and painful after two days, and itches like hell. I’ve never seen this insect before in my 8 years in Costa Rica. Any idea? The color on the wings is black and yellow if the pictures don’t show that perfectly. I would say it was around 1 inch 1/2 to 2 inches long. Definitely not like any normal wasp I’ve ever seen.
Signature: anonymous 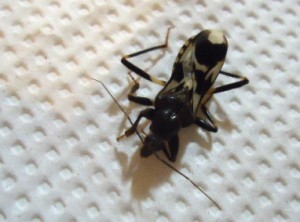 Dear anonymous,
You were bitten by an Assassin Bug, not stung by a wasp.  Many Assassin Bugs will bite if provoked or accidentally encountered, and though the bite is painful, its effects wear off in a few days.  There is one group, known as the Blood Sucking Conenose Bugs in the family Triatominae, that prey upon warm blooded hosts and they will bite humans.  See BugGuide for examples of North American species.  The subfamily is well represented in the tropics where they are considered dangerous as they can spread Chagas Disease.  We do not believe that this Assassin Bug is one of the Blood Sucking Conenose Bugs.  This Google site gives a list of the Chagas Disease carriers throughout the world.

Wow, thank you very much for your detailed response. I will certainly take a look at these links and look further into Chagas.
Be well and happy holidays.

One Response to Assassin Bug bites human in Costa Rica