Asian Tiger Mosquito from the Philippines

Subject: Is this a dengue mosquito?
Location: Ranger street, Matina, Davao, Philippines
November 10, 2016 10:46 pm
Hi bugman,
I was just stung my a mosquito and when it was bellying out on the wall, I noticed it had some white markings on its legs. I know Dengue mosquitos have this too, and I am currently also coming down with flu (slight headaches, sore throat, but no bleeding or rashes or anything). I’m living in the outskirts of Davao City in the Philippines and dengue is known to be present in this region (Mindanao).
I managed to take a few pictures of the mosquito. They’re not 100% sharp, but hopefully it will give you some clue.
I did kill the mosquito by the way. Sorry for that, I know you’re not a fan of that. Neither am I, but in the case of mosquitos (in relation to dengue) I’m not taking any chances.
Thanks in advance for your time. Hope you can identify it!
Greets,
Signature: Hugo Peek 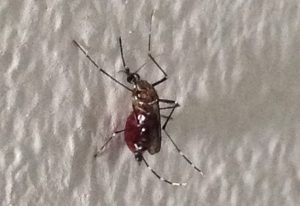 Dear Hugo,
In no way would we ever tag accuse a person of Unnecessary Carnage for swatting a Mosquito.  Based on this BugGuide image, we believe this is an Asian Tiger Mosquito, Aedes albopictus, and according to BugGuide:  “The Asian Tiger Mosquito is so named because of its conspicuous stripes, ferocious feeding behavior and its Asian origin.”  BugGuide provides the following medical importance information:  “Aedes albopictus is most well known for transmitting dengue and chikungunya viruses but it has also been found infected in nature with the following viruses: West Nile, Eastern equine encephalitis, Japanese encephalitis. It can also transmit dog heartworm parasites. (CDC) Ae. albopictus is a competent laboratory vector of at least 22 arboviruses.  Ae. albopictus may have played a major role in ZIKV transmission in Gabon in 2007. (13) Armstrong et al. (2013) tested > 34,000 Ae. albopictus from New Jersey over a 3-yr period to evaluate its importance as a regional arbovirus vector.”

Hi Daniel,
Thanks for your quick reply.
I think you’re right about the Tiger mosquito. We’re all up in arms here now to keep them out and get rid of their breeding grounds, but it’s kind of baffling to me how many people don’t know (or don’t care) much about the risks and keep their doors and windows open as usual. Even after you warn them. I’ve read that the death toll was already in the hundreds nation wide around juli / august and some 80.000 diagnosed cases, which is significantly more than the year before, so it sounds like it’s quite a substantial issue. Our area was apparently designated as “dengue hot zone” in August, but we had no idea.
Well I knew it was there of course, but not like this.Yet as soon as you start a compost heap in the back yard, the neighbors will be screaming their lungs out about snakes. Still have to see the first one after six months here, but I spotted the second Aedes already today. As long as the fever stays away.. But I fear that if Zika arrives (and it seems to be on its way), the doors will literally be wide open. Not the most comforting foresight, since my girlfriend and I are in the baby making phase right now..
Anyway, I should be directing my concerns towards the department of health here, not you 🙂 Thanks for helping me ID the mosquito and best of luck with whatsthatbug. I was browsing the site a little more, and only now am I realizing what a unique and amazing project this actually is. Or more like a work of love probably, with this much effort.
Thanks again and keep it up!
All the best,
Hugo

Thanks for the compliment Hugo, and good luck with your Mosquito control.

Correction Courtesy of Angel van Gulik:  January 17, 2017
So [this] is not an Aedes albopictus, but, in fact, an Aedes aegypti.  It’s in pretty bad condition, but the lines along the edge of the scutum are typical of an aegypti.  I’ve attached a figure to show the difference.