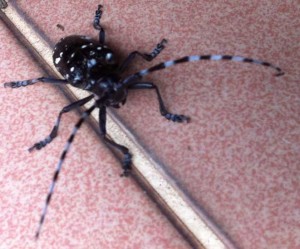 Hi Nathan,
This is the Asian Longhorned Beetle, Anoplophora glabripennis, also known as the Starry Sky Beetle.  The Center for Invasive Species and Ecosystem Health website has a profile on this species which indicates:  “Asian longhorned beetle is native to China and other nearby Pacific Rim countries. It was introduced in Chicago, Illinois and the New York City area through solid wood packing material from China. Domestically, movement of infested tree-based materials, including logs and firewood, can easily spread this insect. It is known to attack at least 18 species of hardwood trees including maple, birch, horse chestnut, poplar, willow, elm, ash, and black locust. Adult females chew out a place to lay their eggs forming oval to round, darkened wounds in the bark. Eggs are laid singly and they secrete a substance that hardens over and protects the egg. Larvae develop out of the eggs and chew banana-shaped galleries into the heartwood, on which they will feed in during fall and winter. The pale-yellow larvae are worm-like, elongate, and cylindrical with a varied texture on the underside; the eighth segment of the abdomen has a protruding structure. Pupae are off-white, 1 to 1 1/4 inch long and 1/3 of an inch wide. Adults emerge during the spring through large round holes (3/8″ diameter) that may occur anywhere on the tree including branches, trunk, and exposed roots. These exit holes can number in the thousands per tree. Adult beetles 1 to 1 1/2 inches long, shiny-black with white spots. They have black-and-white banded antennae that are at least as long as their bodies. The upper sections of the legs of the adults are whitish-blue. Asian longhorned beetle can be distinguished from related species, such as citrus longhorned beetle, by the markings on the wing covers and the pattern of the antennae. Asian longhorned beetles require between one to three years to reach maturity.”  It is not considered an Invasive Exotic species in Hong Kong.

An Alternate Opinion
Are you sure that’s not a different Anoplophora species, like A. chinensis (the citrus longhorn you refer to in the comments)? A. chinensis has a white scutellum and rough pitting at the top of the elytra, vs. completely glabrous wing covers and black scutellum on ALB. The angle’s not good but I swear I see some pitting, plus I am pretty sure the scutellum’s white in that photo. There may be addition species in the genus in their native range that I am not familiar with, too.
(Note my attached image is off the net, wouldn’t let me submit this without an image.)
Signature: Jenn Forman Orth

Dear Jenn,
Thanks for your alternate opinion.  We are not certain that we have the species correct.  We could not locate the image you attached online, so we are linking to an Invasive Species website with a photo of the Citrus Longhorn.