unknown critter
Hello WTB,
After an hour of surfing the web and looking at hundreds of pictures of bugs I am still yet to learn what kind of bug I found crawling around my apartment. I am coming to you in search of answers. I noticed this particular insect when I was cleaning my room the other day and became extremely curious as to what kind of bug this is, considering I have never seen it before. It is no longer than a thumbnail. It’s body is black, but it’s legs are a very light brown color (almost transparent). It’s body is oddly shaped and has a pincher or "claw" on it’s backside. I will say that it is a very strong critter because it took a lot more than I expected to kill it (I know, I know, I probably shouldn’t have killed it, but I did not know what it was and it creeped me out). I assume that it uses it’s "claw" to catch things to eat because before it died I poked it’s pincher with a small wooden skewer and it closed its pincher on the skewer. Any information you might have as to what this insect may be will be oh so helpful to me.
Thank you,
Deborah
PS- I found it on my bedroom floor away not near an outside door. My location is in Lafayette, Louisiana if that is to any help. I also attached a sketch I drew of the specimen with a sketch of a fingernail file for reference to the size of the insect. Thanks again. 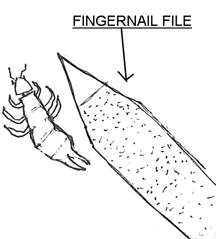 Hi Deborah,
We love your rendering of an Earwig. Those pincers are known as forceps and they do grasp prey as well as performing other tasks. They are omniverous feeders, sometimes doing damage in gardens. They love our roses. They are often attracted indoors, but are generally outdoor critters.