Do you suspect there are termites in your house and are wondering how to get rid of them? If yes, then you asked the right question- are termite alates attracted to light – because the answer is yes.

Termite Alates, or winged termites, are fascinating insects. They are the only ones with wings in the termite colony, but they immediately shed them the minute their life’s purpose is complete.

There are many exciting things to learn about them, including their attraction to light.

Continue reading to understand why they are attracted to light, how to eliminate a termite infestation, and more.

There are four main types of termites in a termite colony

The kings and queens are the ones who bear the responsibility of reproducing and spreading the colony as much as possible.

A certain class of soldiers becomes alates or reproductive termites. The difference between alates and other termite castes is that they grow wings.

Their job is to fly around and look for a good spot to start a new colony when the old one becomes too overpopulated to sustain itself.

The minute they settle for the new colony, they shed their wings and get down to the business of becoming kings and queens of their new colony! Hence alates are only a temporary caste.

What are Alates, and Why Do They Swarm?

In the case of termites, only the wing-bearing termites are called alates. They can include both females and males.

Alates are 3/8th of an inch long (approximately) and have two transparent sets of wings used for creating new termite colonies.

These are usually the most well-fed and looked-after termites in the entire colony because of the huge responsibility they bear.

They also have an antenna, a thorax, and an abdomen( with a slight curve) about the same length, which makes them similar to the appearance of a true bug.

However, the termite species is entirely different and is not a true bug.

What is Their Function in The Termite Colony?

As explained earlier, the winged reproductives are responsible for creating new colonies so that new caste members are born.

These termites’ sole purpose is to produce and pick the king and queen of their colony.

At some point in the year, the mature colonies pick their king and queen. These kings and queens are then fed the most nutritious food available till the day they take their nuptial flight to found a new colony.

You will find termite swarms in your house at this time since they would be flying around looking for good spots to set up camp.

Once the new colony is created, the couple sheds their wings since the purpose is served.

Remember that it’s only the mature colonies that produce alates, not the young ones since they don’t have the need to look for new colonies.

Why Do They Swarm?

They swarm to find an ideal place to create new termite colonies. However, it is a challenging task for the alates to take a long flight to find a suitable place for mating.

Many die mid-way, but those who make it shed their wings and start mating immediately.

It is not necessary for the swarm to have large numbers of termites. It depends on the size of the colony, whether they swarm in thousands or only a few.

When Do They Swarm?

The winged termites do not swarm throughout the year. They look for the time which ensures the highest survival rate, for example, after a dry spell.

Most alates do not have strong wings, and many fall prey to predators during this time. Hence it is absolutely critical for them to find an appropriate time for swarming.

Are Winged Termites Attracted To Light?

Winged termites are attracted to a light source. If you want to eliminate termite infestation in your home, it is a good idea to turn on the lights when the termites swarm.

Once you do, check every room (mainly wooden areas with cracks) for the infestation. If only a handful of termites are found, you don’t have to worry much about it.

However, if you find them in a bunch in different corners of the rooms, they are most likely trying to set up new colonies, which means there is already an existing colony is your house.

Next, step outside your house and look near the trees and around your garden for a sign of termites.

Remember, if you have noticed termites swarming in and around your home, the worker termites would be living nearby.

In any case, leave the lights on until you find the termite colony and get rid of it for good.

You can find termites scurrying around cracks of wooden parts of your window, ceilings, and other areas of your home.

A termite infestation can be a huge problem for your home, so it is better to prevent their entry than get rid of them.

As mentioned, you can turn the lights on to find the termite colonies in and around your house and then tackle them with the following termite treatments.

Other Ways To Repel Termites

The first step to getting rid of termites is to identify which species of termites we are dealing with because it is not a one-method-kills-all method.

For example, fuming will not kill subterranean termites because they come from the soil.

In the same way, you cannot kill drywood termites by installing a termite bait station in the ground.

You can hire a professional termite control company to identify the termite species and use the following methods to repel them.

Are termite alates attracted to light?

Yes, alates are attracted to light. If you doubt a termite infestation in your home, you can turn on the lights when the termites swarm to confirm it.
Once you know about the infestation, seek a good termite treatment with your local company.

Why are flying termites attracted to lights?

Flying termites are attracted to lights because it helps them find their way around. Moreover, bright lights tend to confuse their navigational systems.
You can notice swarms of flying termites under the street lamps or the fluorescent lights during the right season.

Should you turn off lights when termites swarm?

If you want to get rid of termites, turn off your house’s lights, and they will swarm away to the nearby street lamp.
However, if you are doing a termite inspection in your place, leave it on to spot them and get rid of them.

What color light keeps termites away?

Flying termites are usually attracted to bright white light. Yellowish and purple-colored light often chases them away. In some cases, yellow and red light bulbs do the job.
You can put up some of these colored light bulbs outside your home to drive away alates, but if they are already in your house, the best thing to do will be to get a professional to inspect the whole home.

Fortunately, their predilection towards lights is an easy way to spot them and get rid of them.

Moreover, by turning on the lights, you can also make sure that they congregate near the lights rather than setting up a colony. Thank you for reading!

Many readers have shared with us pics of flying termites, their wings, and groups of them swarmed under light bulbs over the years.

Read on to know all about their quest to get rid of these bugs and what methods they used to ensure that their homes were termite free. 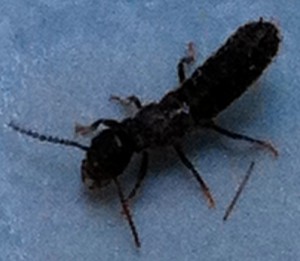 Swarm of small black beetles Location: Santa Cruz, CA October 26, 2010 5:08 pm Every year in Santa Cruz, CA we get a small flood of these small black beetles in our upstairs bedroom. They seem to congregate under skylights and near windows (lots of sun). They are looking for mates, as I can see a number of them paired end to end, while others wander searching. They never have wings and don’t look like termites we see elsewhere around the yard. We just had our first big rainfall and it’s sunny and warm today. Signature: Thanks, David Hi David, This is the third email we looked at this morning with similar Termite Alates from California which just had an unseasonal rain.  None of the images contained winged specimens, and we do not know if there is a species of Termite that does not have a winged reproductive form, but we doubt it.  See our previous posting for additional information. Update:  June 17, 2012 We have been doing some research based on a comment from Sonfish that this is a Devil’s Coach Horse.  While we were confident that it wasn’t a Devil’s Coach Horse, we began to have doubts that this was a Termite and that it might be a Rove Beetle, so we contacted Eric Eaton.  He confirmed our original identification. Eric Eaton confirms Termite Identification June 16, 2012 Daniel: Yes, these are alate termites that have shed their wings.  The one in the bottom image has her abdomen in the air because she is “calling” males with her pheromones, released from glands near the tip of her abdomen.  They do look remarkably like rove beetles when they do that! Eric 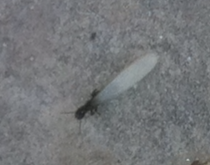 Up from the rocks! Location: Stone April 8, 2011 12:13 pm Hello Bugman, It is the beginning of Spring here in Santa Fe, NM. We finally had some rain yesterday and I was sitting outside my place of work when all of a sudden tons of this little flying things seemed to hatch right out of a rock behind me. Any idea what they are? Signature: Gallery Gal Dear Gallery Gal, You witnessed swarming Termites. 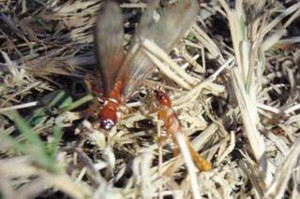 Subject: bocce bug Location: Surrey, British Columbia August 26, 2012 12:33 am Thanks for your time… I have description below that I also gave on the bug id request for bug guide. Surrey, Metro Vancouver, British Columbia, Canada August 25, 2012 Size: 1”, body only 3/8th” We were playing bocce in the backyard with friends and noticed that when we walked through a bit of grass these flying insects would arise. We honed in on where they were coming from and noticed that they were crawling out of a small hole in the earth scrambling over each other sometimes 4 at a time. We watched for a few minutes then went to the front of the house to wave our friends off. When we returned it appeared that the earth had cracked open and masses of the bugs were crawling out of the ground from numerous holes. They would walk or flop around for a bit before taking flight. The ground they were coming from used to house a large tree (unknown variety) we had the stump ground down several years ago but there are sure to be rotting roots still there… At one point we saw a dragon fly come and eat one of the flying insects. What are these? Wasps? Why so many? Signature: Henderson Hi Henderson, These are Termite Alates, the reproductive caste that will mate and form new colonies.

3 thoughts on “Are Termite Alates (Flying Termites) Attracted To Light”