Paper wasps attack dead trees and build nests around human houses. Most people are afraid of wasp stings and want these bugs out quickly. But did you know that paper wasps are beneficial insects? Read all about it below.

Paper wasps get their name from the paper-like material that they use to construct their umbrella-shaped nests.

These wasps are aggressive in nature and will attack if they feel threatened. But do you know that these insects are much more than some pesky stinging pests in your backyard?

Yes, you read it right; these little creatures are highly beneficial and are known to be fantastic pest controllers and pollinators.

This article will share some insight into how beneficial paper wasps are.

Are Paper Wasps Good for Anything?

Paper wasps are highly beneficial insects. These little folks are great hunters and highly depend on hunting other insects like caterpillars, flies, beetles, etc., to maintain their diet. The European paper wasps are known to consume more insects compared to the regular paper wasp in their diets.

Their hunting nature makes them an excellent source of pest control. Since they also feed on flower nectar, they are considered efficient pollinators. Let’s learn more about it below.

Are Paper Wasps Good for the Garden?

Papers wasps are omnivorous. Thus, they feed on both insects and flower nectar. The central part of their diet includes pests like caterpillars and flies.

Unlike other wasps, they don’t paralyze the prey. They directly catch and kill their prey and then carry it to the nest to feed it to the developing wasp larvae.

This nature makes them excellent for eliminating pests around your house and yard.

Since they are social wasps, they live in colonies (only about 200 per nest), which means there will be multiple paper wasps in the same location to eliminate the existing pests from the region.

Adult paper wasps are good pollinators as they rely highly on flower nectar to complete their diet, which provides them with the calories to fly all day.

These wasps are highly attracted to gardens that are filled with flowers. They are particularly fond of woodlands, goldenrod, and fields.

They hover around such flowers, drinking nectar, and then carry pollen along with them, which they can spread across the garden.

How To Identify a Paper Wasp?

This species of wasp has a dark brown or black colored long slender body with vivid yellow markings. They are about 0.65 inches long.

These wasps look similar to the yellow jacket wasps. But you must note that yellow jackets are much more aggressive than paper wasps, which often attack humans and pets.

Therefore it is crucial to be able to differentiate between the two. A paper wasp is slightly bigger in size, and the density of the yellow markings on the body is less compared to a yellow jacket wasp.

On the other hand, the paper wasp lives in smaller settlements and is known to build aerial umbrella-shaped nests in places like tree branches.

Because of the umbrella-shaped nests that they create, paper wasps are also known as umbrella wasps.

Are Paper Wasps Aggressive or Dangerous?

Paper wasps are capable of inflicting a lot of pain through their stings. You should note that these wasps can show aggressive behavior to defend their nest.

However, they generally refrain from attacking humans and pets unless one tries to bother them or their nests.

On stinging, these wasps release venom that can trigger allergic reactions in some humans. Therefore if you ever come across a paper wasp nest, refrain from touching it.

Since these wasps live in colonies, having a wasp nest in your house might be a big nuisance, especially if you have children in your home.

To prevent these wasps from building near your home, you must seal up all the spots that may serve as entry points.

Make sure that the places like open dampers, torn screens, unsealed vents, and window cracks are all sealed with caulking.

Wasps generally don’t build a nest around areas where a colony is already existing; therefore, you can hang a fake wasp nest to drive them away.

Get rid of pests like caterpillars, cockroaches, tree crickets, and more. By doing so, you are eliminating the protein sources that these wasps feed their growing larvae. Paper wasps will only build nests in areas that ensure an adequate amount of protein supply to them.

Also, you will be fascinated to know that wasps don’t build a nest on blue paint. So to keep them at bay, you can paint your house blue.

Should I remove a paper wasp nest?

If you find a big paper wasp nest in your house, you should remove it but with proper safety.
Ensure that you cover all the parts of your body, as these wasps will sting in areas with exposed skin. Wear a helmet with a screen to cover and protect your neck and face.
You can use permethrin-based aerosols, or else if the nest is still small, you can simply use a pole to bring it down. The queen will choose a different spot to make her nest.

Do paper wasps return to the same nest?

Paper wasps never return to the same nest. Therefore if you find a nest during the early spring and summer months, there is a high chance that the nest is empty.
But you should note that these wasps may return and build a new nest in the same area if the conditions are favorable for them.
Gardeners often use this to their advantage, ensuring that these wasps build their nests around the garden every year.

How long does it take paper wasps to build a nest?

The queen bee starts building her nest alone with a very small number of cells. However, once her eggs start to hatch, the drones take over and quickly start adding to the nest.
Depending on the availability of wood pulp, it takes around 4-6 months for a paper wasp nest to be fully developed, by which time it is large enough to house 200 wasps.
Since the paper wasps colony keeps growing bigger with time, the nest needs to expand along the way. Therefore a paper wasp nest can be under construction throughout the spring and summer.

Where do paper wasps go in the winter?

During winter, most of the paper wasps die. The surviving female wasps hide and hibernate in warm and undisturbed places like attics.
Once they enter these warm spots, they suspend their development throughout the cold winter. When the winter is over, they creep back out.

Paper wasps are beneficial insects and can be used for effective pest control and pollination. But you must know how to handle them properly.

Their sting can cause a severe reaction in people who are allergic to insect bites, so make sure to keep your distance and watch them from afar.

We hope this article provided enough information for you to understand these wasps better.

Thank you for taking the time to read this piece.

It is always a two-edged sword to find a wasp in your garden, and many of our readers have checked in with us about paper wasps making their nests near their houses and yards.

Go through some of the experiences below. 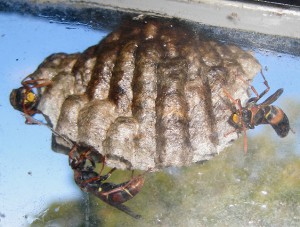 February 12, 2010
Well, encouraged by your kind words about my photos, I decided to take my current ‘project’ to the next stage: I’ve been photographing these wasps building their nest outside our house, behind a window, and today I thought of taking some outside photos of the progress. I removed the fly screen, stepped on the windowsill, and stretched my hand out with the camera to record detailed images of the geometric components of their nest. Surprise, surprise, the wasps didn’t like it. They suddenly turned on my camera, all of them in line, pointing and shaking their whiskers towards it, and before me realising what was happening, they made their move. I broke my camera when I dropped it, and I’m now tendering about three wasp bites on my swollen arm and fingers.
I think my camera memory card is still OK, so hopefully the nest photos are still there! In the meantime, can you identify my attackers from this earlier image:
Best,
Ridou

Hi Ridou,
We are so sorry to hear about your unfortunate encounter with these Paper Wasps in the genus Polistes.  We believe they may be the Australian Paper Wasp, Polistes humilis.  The Brisbane Insect Website has some amazing photographs of this species.  Paper Wasps are not normally aggressive, but they will attack and sting if the nest is threatened.

Hi Bugman,
In case you’re interested: here are two images that I managed to get from my broken camera’s memory card: they were taken at the time when I dropped my camera because of the attack by these paper wasps… The first image shows the structure of the nest they’re building, and the second shows them lining up to defend it.
Best,
Ridou

Hi again Ridou,
Do you know if the second nest was from the previous year? 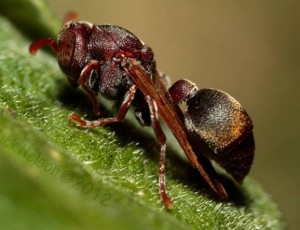 Dear SCWIDVICIOUS,
We believe your identification of this Paper Wasp is correct based on this photo from Oz Animals.  The Brisbane Insect Website calls this the Small Brown Paper Wasp. 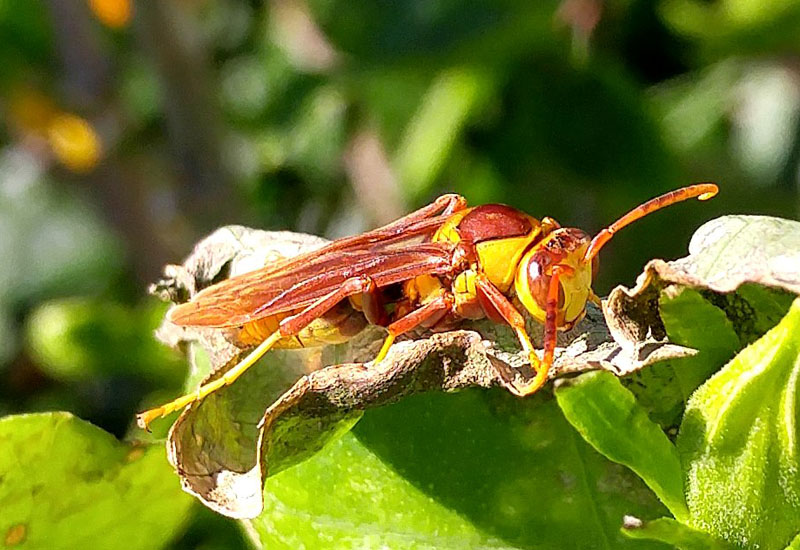 Subject: Hornet? Wasp? Mimic? Central FL, mid-Jan.
Location: Palm Bay, FL (Brevard County)
January 29, 2016 3:42 pm
Hello,
We live in east central Florida, and this beautiful insect was in our hibiscus plant recently (January, temps in upper 60’s). I have looked for hours and can’t identify it… the reddish colors and pattern don’t quite match any of the hornets, yellowjackets, wasps, or moths I’ve been able to find online. I wouldn’t be surprised if it is actually a wasp mimicking moth. It certainly wasn’t aggressive at all. Any thoughts on what this is?
Thanks,
Signature: Mike W.

Dear Mike,
We believe this is a Paper Wasp in the genus Polistes, and it is most likely a light colored Polistes major like this individual from Georgia that is pictured on BugGuide.  We will check with Eric Eaton and get his opinion.

Eric Eaton Confirms ID.
Hi, Daniel:
Wow, great images!  Yes, this is a male Polistes major.  Male specimens of many Polistes appear paler in some cases than the female.  I also think these images were taken in very harsh light, which washes out the color on most insects.
Cheers,
Eric

Thank you! I have to agree that this seems to match my photos almost perfectly. The fact it’s an invasive species would certainly help explain why I had such a hard time figuring it out. But as long as it’s here, at least it’s attractive to look at! 🙂
Thanks again,
Mike