June 29, 2011
Two days ago, Lefty suddenly began to exhibit symptoms that something was wrong, including staying near the bottom of the tank motionless.  Then he would rest on the bottom upsidedown with labored breathing.  Yesterday morning, there was no change, and then in the late morning, Lefty died just a month and a half after his mate Digitalis died suddenly.  Though it seems this was not a very old age for Angelfish (see Angels+), Lefty and Digitalis produced many batches of eggs.  The cream of the crop from their most recent brood are growing nicely in the 40 gallon tall aquarium.  There are 16 fledglings in the aquarium now of which four are gold. 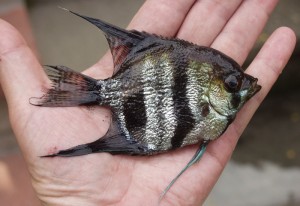 One of the most surprising events in Lefty’s life was the day he jumped out of the water and landed on the glass cover of the aquarium while I was working in the water.  He was trying to defend his brood.  He and Digitalis were excellent parents who cared for their young.  Lefty lost most of his right pectoral fin when I originally brought the pair along with the other mated pair of Angelfish, Boris and Medea Luna, home in March 2009.  The four fish came from the same pet store and they had already begun forming relationships.  Seems Lefty was rejected by the other three fish and he needed to be boarded for about a month at my local store, Tropical Imports.  Lefty had a real personality and he will be sadly missed.  Here is a photo of Lefty in happier times. 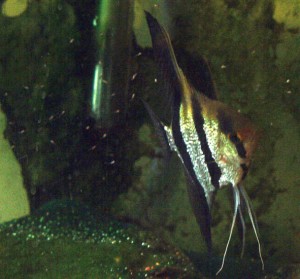