Orbweaver with Spiderlings from Brazil Springtails in Australia

Subject: Ant’s
Location: Central North Island, New Zealand
October 26, 2015 8:20 pm
I found this in my garden today, its is about 4mm in body length and dark blue with these two yellow spots
Signature: Mike 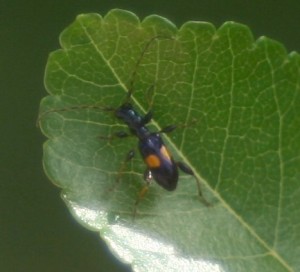 Dear Mike,
Though it resembles an Ant, this is actually a Longhorn Beetle in the family Cerambycidae.  Several years ago we posted an image of a mating pair that were identified as being in the genus Zorion.  there are many nice images on the GrahamNZ website and there is also a nice image on FlickR.

Thank you for the information.  I phoned someone who should have known and was told by him it was a flower bug
At least I know its basically harmless.  It will now go in the files with the spiney spiders found last year
Mike

Hi again Mike,
In defense of your source, we do have a comment on our previous posting indicating this is a Flower Longhorn, however our research, including a scholarly article on the Massey University of New Zealand site, has determined that it is in the subfamily Cerambycinae, not Lepturinae whose members are commonly called Flower Longhorns according to BugGuide.

One Response to Antlike Longhorn Beetle from New Zealand