mystery beetle
Greetings!
Can you please identify the bug in the attached photo? It appears to be some type of beetle. Actual size is just under 1/8 of an inch long. It’s very slow moving, and will sit motionless for long periods. Coloring consists of alternating gray and black bands. I live in Northern New Jersey, and this bug was found indoors in February. I’ve seen this kind of bug occasionally all my life, always indoors, and always just sitting motionless. I have no idea what they eat. They’re never around in large numbers, but I’ll see three or four throughout the year, in various parts of the house. They are not associated with the kitchen, or anyplace else where there’s food. Thanks! I hope you can tell me what this is.
Don Riemer 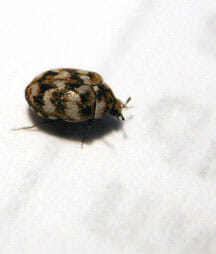 Hi Don,
This is an Anthrenus Carpet Beetle, one of the Dermestids. Here is what Charles Hogue has to say: “These are the common Carpet Beetles. The adults have conspicuous variegated patterns of red, white, or black splotches on the back. The larvae are stout and less than three times as long as they are wide; they have hairs along the body that are generally stiff and erect, and there are two tufts at the rear end. These beetles are hated by entomologists because they often destroy collections of dry insect specimens.”