Subject: Butt eyed ant
Location: Lilburn, Georgia
October 6, 2012 3:51 am
I found this guy on a weed that had grown up in my salvia bush. It had two spots on it’s butt that looked like eyes. Quiet a beautiful ant.
Signature: antwatcher’s sister 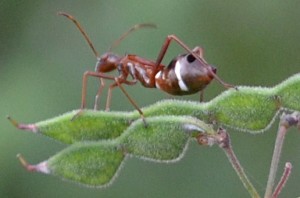 Dear antwatcher’s sister,
Though this is not an Ant, your error is understandable.  This is an immature Broad Headed Bug in the genus Alydus, and they are frequently called Ant Bugs since they are such effective ant mimics.  There are several fine photos on BugGuide.