Subject: What is this thing?
Location: A wetland in Reynoldsburg, Ohio
October 7, 2012 2:35 pm
Me and two fellow students are doing a project concerning the insect life in our backyard wetland. We found this nifty-looking guy, but have no idea what it is. I’ve looked everywhere online, and asked in a bunch of other Q&A sites, and gotten nothing. People keep saying it might be a velvet ant, but I know it’s not. It has a proboscis, long antenni, really long back legs, and you might not be able to see in the pictures, but it appears to have very small, possibly vestigial wings folded up on the back of its thorax.
Signature: Connor 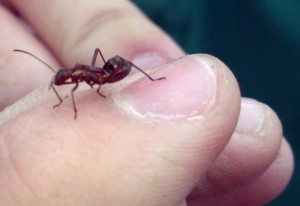 Hi Conner,
This True Bug is a very effective ant mimic.  We believe it is an immature Ant Bug in the genus Alydus, a group of Broad-Headed Bugs that are well represented on BugGuide.  The BugGuide genus page mentions the common name Ant Bug.  We would not discount that it might be a nymph of a Black Damel Bug, Nabis subcoleoptratus, based on this photo on BugGuide , but we still favor the Broad Headed Bug. 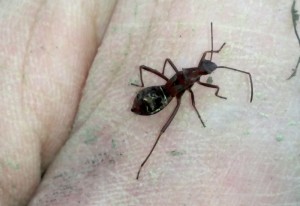