Big Black Beetle in Baja
A few weeks ago, Baja Norte, that area of Baja (Mexico) from Tijuana south to Ensenada, was invaded by a plague of big black beetles. We’ve lived here for a few years and hadn’t seen them before. They were preceeded by hot dry Santa Ana winds blowing in from the eastern desert-y areas, so they may have come via air (some think they can fly, although I haven’t seen that, and there have been a LOT of them around to observe). They are cannibals. They are bold, and they seem to have some desire to come into the house, where they eventually end up in the bathroom, although not in tubs/showers/toilets per se. A few have even ended up in the sack with us – ewww! They don’t seem much interested in eating our plants. The one in my pictures is on the smallish side; others have been as much as 1⁄4 inch longer. Can you tell me what it is, and something about it? Thanks! 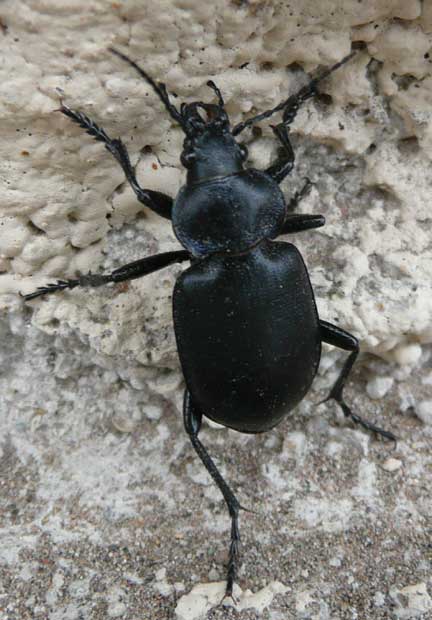 We originally replied that your beetle is a Caterpillar Hunter in the genus Calosoma. Out of pride, we posted our own photo that day as we found two individuals in our own Mt Washington, Los Angeles garden. Then other reports began to pour in from Southern California. We were having difficulty identifying the species, and BugGuide did not provide an answer based on its posted Calosoma species. We found our answer in Charles Hogue’s awesome book: Insects of the Los Angeles Basin. Hogue identifies Calosoma semilaeve as the Common Calosoma, though the species not being represented on BugGuide makes the use of common seem a bit odd. We would love to dub this species the Desert Searcher. Here is what Charles Hogue writes about Calosoma semilaeve: “During the spring this beetle may be so common as to constitute a pest. The adults are large (about 1 in., or 25 mm, long) and run free during the day rather than being nocturnal and confined to burrows or cavities under objects on the ground, as are most ground beetles. The Common Calosoma sometimes enters homes and, when disturbed, emits a disagreeable chemical that smells something like burnt rubber or electrical insulation. Because of its size, black color, and activeness, it is sometimes mistaken for the Oriental Cockroach. Wireworms and caterpillars, especially cutworms, are the favorite prey of both adults and larvae. Consequently, the species is very beneficial to the gardener.” Hogue rocks!!! Because this is apparently an “outbreak” year, and because this species feasts on garden pests, we are offically proclaiming it the “Honorary Secondary Bug of the Month for May” and posting it along with the White Lined Sphinx. 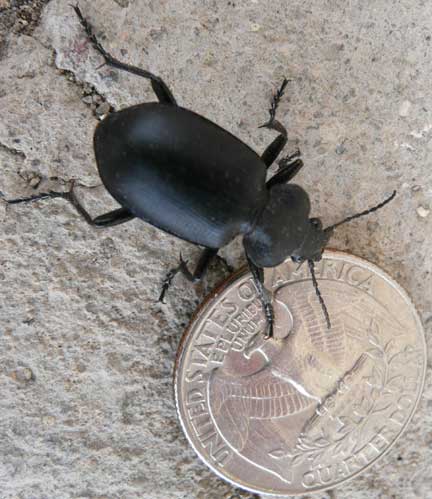 Comment: (05/15/2008) Bug of the month – Calosoma
Hi WTB staff,
I have encountered many of these new determined beetles in my San diego, California backyard. And yes they do indeed fly. I have seen them walk across my yard, then get to the patio, then fly. They are also aggressive meat eaters. I found a dead bird in my back yard, only to find one of these beetles ravenously cutting away feathers and meat. I’m just glad their only 2 inches long.Thanks
Jeff

Update: (05/17/2008)
Hi from Los Alamitos California – I am writing to tell you your beatle of the month has made its way to Los Alamitos, Cypress, Seal Beach and Long Beach. I saw one in front of my work yesterday in Cypress. My son called me later in the day, he attends Los Alamitos High School. He was saying he kept seeing these beetles all over his school. I was at the Buena Park Mall yesterday afternoon, a saw beatle in one of the stores. I have an awful phobia a bugs. Ever since the infestation of the “waterbug”/palmetto in Lakewood CA in the late 70’s or early 80’s. Anyways long story short – Is there anything we can do to keep these bugs/insect out of our homes.

Sorry, we have now suggestions on keeping them out of the home.

Update: (05/19/2008) Bug of the Month: Black Beetle
Hey, guys. Just wanted to add my two cents to the updates; I live in Redondo Beach, CA, and saw two of these suckers yesterday. I’ve lived in L.A. County my whole life, and I don’t remember seeing one of these guys before. Scared the heck out of me at first, but it sounds like I may as well get used to them.
Jen D

Update: Caterpillar Hunter goes for the toe!!!
(05/19/2008) bug of the month
Dear Bugman,
I have seen many of these black beetles around my work place. inside and out. I would prefer to keep them out! Two of my co-workers have actually been bitten by these nasty little critters. I see that previous posts have labeled them carnivorous. This is extremely disturbing. Do you know if they are harmful,, or just a pain in the neck/toe?

Our coworker in education, Professor Rhonda G., called our home office quite hysterically on Saturday. Seems a big black beetle bit her on the pedicured toe that was peeking suggestively from her sandals. Sight unseen, we identified her attacker as the Caterpillar Hunter that is making numerous southland appearances. We believe her dainty toe with its polished toenail was mistaken for a caterpillar. Calosoma semilaeve is harmless.

Update: (05/20/2008) Dear Bugman:
I am wondering how long Calosoma will be traversing the Los Angeles area. I had a nasty run-in with a very aggressive one that was intent on removing my second toe last weekend. I was working in an office in Torrance, (wearing sandlas) intent on figures on the computer screen when I felt what had to be a sharp bite. I used my other foot hurriedly to scrape whatever it was, off, while I stood, screaming rather loudly, only to see the back-end of a large black beetle in retreat. I screamed louder and grabbed my shoe. Two co-workers came in and they shifted the file cabinet and Calosoma ran out. I tried to smash it with my sandal so I could return to work in peace, but it dodged with alacrity and speed and slipped under the computer tower and on to parts unknown. I am back at work three days later and on Calosoma-watch with my two office mates. My co-workers have not seen it. Could it still be lurking? This insect is a warrior and a blood-thirsty carnivore. I think it was trying to hold on as I was trying to dislodge it. If these were larger bugs, we would have a movie script for world domination and the end of homosapien life. I am in a bit of awe though, because I realize that Calosoma is intelligent: it planned an attack. It made the decision to climb the platform of my sandal and it selected the toe it probably believed would afford it the greatest chance of success. But I question its ability to reason or think critically: I wear size 10 shoe. At any rate, I hope the one in this office and others in our area will be moving on soon. A caterpillar does not stand a snowball’s chance in hell. Thanks to “What’s that Bug” for helping calm my hysteria and identifying this fearless bug, holding its own in the mean streets of L.A.

Dear Hysterical,
We assure you that the Calosoma is quite harmless. We also expect this population explosion to diminish within the next month.

Update: (05/27/2008) Bug of the Month – Calosoma
As a librarian in Torrance, California, I was feeling some pressure to find out what these bugs were that people kept seeing about town. At first it was just a few, but the sightings are becoming more and more frequent. Today, we found the first of these guys inside the library. I stumbled across your wonderful website while trying to find some information, and have printed out your feature on the Bug of the Month to share with those that are interested. Incidentally, our Summer Reading Program theme this year is “Catch the Reading Bug!” Thanks for the great website!
Theresa Babiar
Youth Services Librarian
Katy Geissert Civic Center Library
Torrance , California

Update: (06/07/2008) Calasoma CSI: Case Closed
Calasomma Strikes Again After Three Week Hiatus
It took nearly three weeks, but the toe-biting Calasoma who attacked an unwary mortgage consultant working on a weekend in Torrance California, has again reared its antennae . May’s “bug of the month” terrorized a mortgage consultant who had a desire to crunch nothing more than numbers in early May. The insect’s attack nearly drew blood and sent a wave of fear through the normally pleasant office, located 15 miles south of downtown Los Angeles. Following the first attack, it was assumed Calasoma had fled the premises, so no exterminators were called in. In the second attack, just as before, observers say Calasoma stalked its victim. Agents and consultants were working peacably, never knowing that in the intervening weeks, they were being watched by Calasoma. The exact same foot-fetish bug had attacked Rhonda G. at her desk. After a brief row, it ran for its life. We theorize Calasoma must have been driven by hunger. But the day of the second attack, proved to be its undoing. A visiting Chase Bank representative was the first to see the wiley insect. He told Lori Q rather calmly, “There’s a bug near your foot.” Calasomma was making a bee-line for Lori Q’s black, 4-inch, snakeskin pumps–open-toed of course. Lori Q. sprang to her feet and grabbed a nearby trash can as the other agent present, Ayessa P., screamed. The Chase agent seemed conflicted as Lori tried to speed Calasomma into its next incarnation, by smashing it with the rim of the trash can. This insect must have been faint with hunger after walking the floorboards of the office for 20 or so days:There is nothing for the carniverous bug to eat here. Nevertheless, it summoned its strength and agility for this final battle. I imagine that Lori Q.’s carefully pedicured, exposed toes must have seemed like a potential and irresistable moveable feast. I am told Calasomma moved with blinding speed, dodging Lori’s death blows. She would not step on the bug because she said she did not want to soil her pumps. The Chase rep realized that the trash can was not getting the job done and Ayessa’s deafening screams were not helping either. So he deftly threw an 81/2 x 11 sheet of paper to the floor, covering Calasomma and smashing it with his steel-toed boots. Witnesses reported Calasoma writhed on its back in its death throes. It is amazing that the bug could survive for so long without food or drink and still plan an attack and fight back…but too stupid to make it to the exit door. We felt a twinge of sympathy for the bug that seemed to grow larger in the re-telling of the first attack, but seemed a bit smaller in death. But still, do you suppose we need to worry about off-spring. It is springtime and it could be a she and the bug was here for a long while. Thanks,
Rhonda G.
P.S. I don’t know that I will ever be able to comfortably wear sandals again.

Dear Rhonda G.,
Nice lead. This story has the potential to be adapted into an amazing “squish” video, not that we could ever condone that. In the event that Calosoma semilaeve procreated in your office, the equally predatory larvae should be making appearances soon.

Update:  April 11, 2015
Wayne’s Word Palomar blog has this to say about Calosoma semilaeve:  “Common calosoma (Calosoma semilaeve), a large beetle that runs free during daytime hours in search of prey. With its long cursorial legs it runs very fast. When disturbed or threatened it emits a foul oder that smells like burning electrical insulation.”

5 thoughts on “Another Bug of the Month: May 2008 – Common Calosoma deserves a better name: Desert Searcher perhaps!!!”