Oh Bugman, ever since I found you, you’re the first one I think of when I discover somethin new !
Hello.
Gosh, ever since I moved to a more "private" place (Chadds Ford, Pennsylvania; about 20 miles outside of Philadelphia), I’m realizing that it’s not so "private". Well, with all the visitors and all. I’ve attached two pictures of an insect I’ve never seen. It moved rapidly and jerky when approached and avoided me at all costs. In my attempt to make him/her (let’s just say "it" to expedite things) "famous" by photographing it, it’s leg was snagged by a web thereby alerting the spider (which I’ve never witnessed). In my haste and attempt to deter a homicide, I spooked the spider away. Okay … so it was so I could have my "professional" photo displayed on your site. In any event, after apparently being extremely annoyed with me, it just flew away. Why did it wait so long before saying, "enough is enough"? Most importantly, what the heck is it? 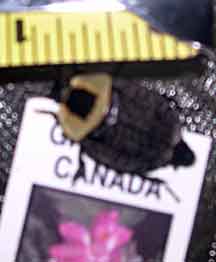 Dear Anonymous,
Your photo of an American Carrion Beetle is blurry, but we don’t care because we love your letter. Carrion Beetles eat rotting flesh, so perhaps there was a dead thing nearby.