Amber goes to a convalescent home

Amber goes to Kimberly’s House
November 21, 2010
For those of you readers who have been keeping track of The Fuzzy Bottom Gals and Daniel’s adventures raising chickens, you haven’t had any updates since Umber died on October 1.  Ginger followed Umber on October 24, about a week after I began to worry about Amber’s eye which had swollen up.  I tried to find information on the internet regarding a swollen eye, and eye problems are both symptoms of Marek’s Disease, Newcastle Disease, and numerous other chicken diseases.  I started to treat Amber’s eye with Neosporin, a tip I found on Raising Chickens:  Keeping Chickens in your Backyard forum. 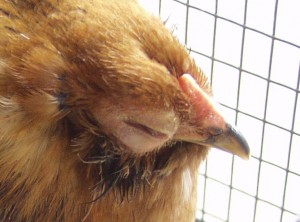 As I was treating Amber’s eye, Gingers health deteriorated rapidly.  It began with a crazy neck twisting followed by an unusual cluck.  Then she began to lose her balance.  Then she became listless and stopped eating.  Several days later, I decided she needed to follow Umber.  Distraught that I was down to just one chicken and feeling like a failure, I started a telephone dialog with Wes of Wes’s Petshop and Seed in El Monte and he told me to try an aspirin in Amber’s water as well as putting garlic on her beak.  On Veteran’s Day I visited Wes and he gave me antibiotics.  After a week and a half, there was a slight improvement, and I went to get more antibiotics from Wes.  Then Amber’s eye started to get worse.  Wes told me about Kimberly, a woman who nurses chickens back to health, and I talked to her on the telephone.  The list of things she told me to do was daunting, and working all day during daylight hours makes it very difficult to care for a sick hen.  As Amber’s eye started to worsen, I decided to turn Amber over to Kimberly for some loving care.  I met Kimberly this morning in El Monte and she wrapped Amber in her sweater.  She told me Amber might lose the eye, and she believed she may have a parasitic worm.  She is going to deworm Amber and I will call to check on her progress.  I don’t know if Amber will ever return home.  I don’t feel I can ask for her back if Kimberly saves her.  Though I thought I provided a nice environment for the Fuzzy Bottom Gals, Kimberly lets them all sleep inside the house, and though my coop seems like a nice coop, it can’t compare to a warm living room.  When I am ready to give raising chickens a second try, I will be sure to inform you faithful readers. 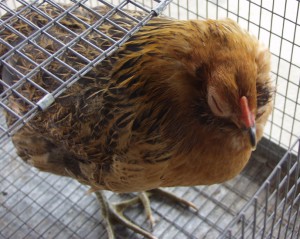