Subject: swarm of caterpillars
Location: Fairfax, VA
July 21, 2015 11:40 am
This has got to be the most unusual behavior I’ve ever seen – a swarm of small (5 – 8 mm in length), translucent caterpillars, slowly moving across a sidewalk (to get to the other side, of course!) in a stream nearly the width of the sidewalk, with a depth of several individuals. I did not see it from the beginning, but I estimate it took about 15 minutes for them to reach the other side. It was most similar to watching schooling fish, but in slow motion. I assume this is adaptive behavior for the same reason as schooling and herds? This was at 8 AM on a very humid day, if relevant. Any idea as to species? Have you heard of this before? Is swarm the right term?
Signature: Seth 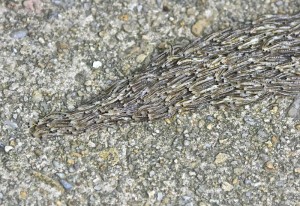 Dear Seth,
This fascinating phenomenon is an aggregation of Fungus Gnat Larvae in the family Sciaridae.  We generally reserve the term swarm for winged species while in flight. 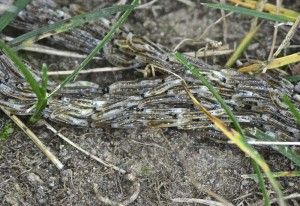