Subject: They are devouring my figs!
Location: San Diego County, CA
August 5, 2014 12:15 pm
Dear Bugman
My young fig tree was going to have a big crop of figs – until these guys arrived! We live on 3 acres in northern San Diego County, CA, mild weather, etc.
I have spent HOURS looking online, but still haven’t found anything quite like them. I don’t think they are Japanese beetles, but that’s as close as I can come. I believe that they attack fruit that has had a bird peck at it, but once that happens, they are voracious.
Any help would be appreciated. Thanks for your time,
Signature: Kathy 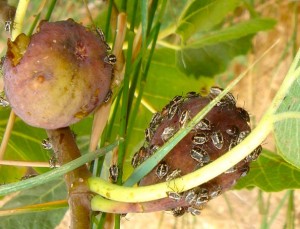 Yikes!
Daniel, I fear that you are dead on in your diagnosis!  My “BIG bugs” tag referred to the size of the photo: I had significantly enlarged it.  Now that I have a name I will do more research.  Thank you soooo much!
Gratefully,
Kathy