Subject: grayish brown caterpillar with distinctive “eye” pattern on rear end
Location: Mt Diablo State Park, Eagle Peak Trail
May 3, 2017 10:07 pm
Hello!
I was hiking in the northern side of Mt Diablo State Park (San Francisco Bay Area) in late April when I came across this fellow on the Eagle Peak trail near some oak and pine trees (~1000 feet elevation). Its head end was light red, its body mostly grayish brown with subtle horizontal bands and two symmetrical vertical yellow stripes, and its rear end had a distinct yellow and black “eye” marking. About as big as my pointer finger (see photo with shoe for scale). I’ve never seen anything like it; it’s definitely not a swallowtail, and I’m pretty sure it’s not a moth. Any ideas?
Signature: Kitty 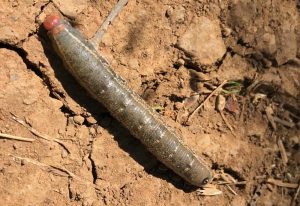 Dear Kitty,
This is a Hornworm in the family Sphingidae, and most caterpillars from this family have a caudal horn.  The genus Eumorpha is unusual in that many species in the genus lose the caudal horn as fourth or fifth instar caterpillars.  A common California species is the Achemon Sphinx, Eumorpha achemon, but your aerial view does not reveal features that generally help us to identify the species.  That stated, we did find an aerial view posted to BugGuide, so we are relatively confident our identification is correct.  The Sphingidae of the Americas site may provide additional information you find interesting.  We also learned of Sphingidae of the Americas that the Vine Sphinx, Eumorpha fasciatas is a rare stray in California, and it has a variably colored caterpillar that also lacks a caudal horn, but we are still leaning toward the Achemon Sphinx.

Hi Daniel-
Thank you for the information! This is very helpful. What a beautiful moth! Maybe I will get to see one of those in the coming weeks. Thanks again!
-Kitty