Subject: large caterpillar in north Tucson, aAZ
Location: Tucson, az
October 4, 2014 12:28 pm
saw this guy on the patio this morning and I had to take a picture of him. this photos taken in the northern part of tucson arizona on october the fourth around 11 am. average temperature is about 90 degrees. I thought it was a sphingicampa raspa but I’m less than 50% sure on that.
Thanks a bunch.
Signature: neil 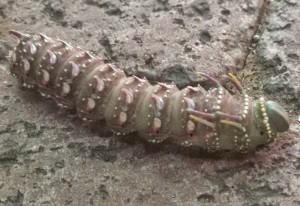 Hi Neil,
You have correctly identified the genus Sphingicampa, but according to BugGuide:  “Eight species occur in America north of Mexico” and they all have similar looking caterpillars.  BugGuide reports three species in Arizona, including Sphingicampa raspa, and we do not have the necessary skills to say for certain which species you encountered.