unidentified Mexican butterfly Jan. 2010
January 24, 2010
Thank you for the ID of the Many Banded Daggerwing. This smaller, orange, black and white beauty was in the same area on the Mexican Yucatan peninsula. I am hoping you can tell me more.
fparker
Mexico Yucatan area 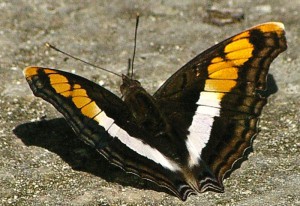 Hi again fparker,
Before we clicked and enlarged your photo, we thought it might be a California Sister, but clearly it is not, nor is it a Lorquin’s Admiral which it also resembles.  Your butterfly is a Silver Emperor, Doxocopa laure, and we believe it is a male, though your photo does not show the bright blue irridescence when the light strikes the wings at the correct angle.  The North American Butterfly Association of North Texas has a nice page on this species.  According to BugGuide, the species is “Sexually dimorphic upperwing patterns. Females have a diagonal white slash across both wings, and a yellow spot near the forewing apex; extremely similar to female Pavon Emperor but this species has a broader white stripe with a rounded tip. Male has a stripe across its upperwings but is white only on hindwings, turns yellow on forwings. Underwing pattern is similar to upperwing but less distinct and with a grayish or silvery cast overall.”  BugGuide also indicates:  “Adults visit rotting and overripe fruit, sap, animal dung, and carrion. Larvae feed on foliage of hackberries and sugarberries.”  Thanks for contributing another new species to our website.

Request Regarding PHoto from our archives