Subject:  iD this bug
Geographic location of the bug:  South Carolina
Date: 07/20/2021
Time: 05:14 PM EDT
Your letter to the bugman:  This flying insect along with many more of the same were swarming low to the ground around some blooming flowers. However they seemed more interested in the pine straw than the nectar. Will he sting? Children pass through here often.
How you want your letter signed:  Kim 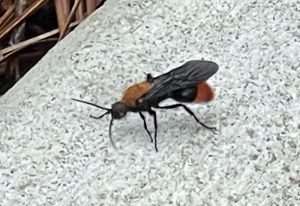 Dear Kim,
There is a group of flightless female Wasps in the family Mutillidae that are commonly called Velvet Ants because they resemble Ants, and they are known to deliver a very painful sting.  Only the females are flightless and though the family is referred to as Velvet Ants, it is only the females that truly deserve that name, but for the sake of convenience, we will call this a male Velvet Ant.  We believe based on this BugGuide image that the species is Dasymutilla occidentalis.  The stinger of a Bee or Wasp is a modified ovipositor, an organ used in the laying of eggs.  Male wasps do not lay eggs, do not need an ovipositor, and consequently, they cannot sting.  Watch for the flightless female Velvet Ants called Cowkillers.  They do sting and the sting is reported to be quite painful.