Subject:  Orange Wasp
Geographic location of the bug:  Massachusetts
Date: 07/11/2021
Time: 02:14 PM EDT
Your letter to the bugman:  Showing up on my milkweed plants. Seems very aggressive against other bees/wasps.
How you want your letter signed:  Vinny 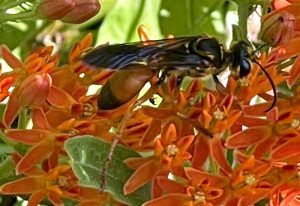 Dear Vinny,
This is a Great Golden Digger Wasp and Daniel has been posting images of this species from his Los Angeles garden last month where they were nectaring from blooming onions.  The Great Golden Digger Wasp is a solitary wasp and they are not generally aggressive and they do not defend their nests.  The female feeds on nectar and milkweed is a marvelous nectar producing plant.  The female also hunts Katydids which she stings and paralyzes and then drags back to her nest where she lays an egg that will hatch into a helpless larva that will eat the paralyzed Katydid alive.  Great Golden Digger Wasps rarely sting humans, but the sting is likely quite painful.  She will only sting if threatened.  She would much rather save her venom for paralyzing Katydids than warding off predators, so she has aposomatic warning coloration (orange and black) and she moves in a jerky and attention getting manner to warn would be predators to avoid trying to eat or lest they encounter a painful sting to the mouth.

Thank you Daniel. This information will ease our minds in regards to potential bites as they are appearing in large numbers.