Subject :  What in the world is this?
Geographic location of the bug:  Murray, Utah
Date: 07/05/2021
Time: 08:32 PM EDT
Your letter to the bugman:  We were moving things in our mother’s unfinished basement preparing for her home to be sold and this frisky fella was hiding in a cardboard box. Scoots around pretty fast and reminded us of a crab with how it walked. It looks “dusty” and at first we thought it was some sort of spider, but only has six legs, not 8 and has antennas. Is this something to be worried about in her home? Are they poisonous, do they bite, what attracts them?? So far we only found one but he’s a really cool looking fella!
How you want your letter signed:  Stacy the nervous bug 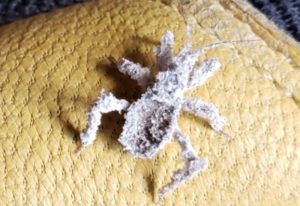 Dear Stacy,
This is a Masked Hunter, an immature Assassin Bug in the species Reduvius personatus that has a sticky exoskeleton.  All manner of dust and debris sticks to the insect, effectively masking it in its surroundings in an interesting example of adaptive camouflage.  According to BugGuide:  “Nymphs cover themselves with dust, lint, sand, and other debris which usually matches the color of their immediate surroundings and makes the nymphs difficult to detect.”