Subject:  Rare Hummingbird beetle
Geographic location of the bug:  Arkansas
Date: 06/19/2021
Time: 10:31 AM EDT
Your letter to the bugman:  Found this video on local Arkansas Facebook group with small shiny flying green beetle like humming bird getting nectar. Can you identify? Have video but to big to post.
How you want your letter signed:  ? 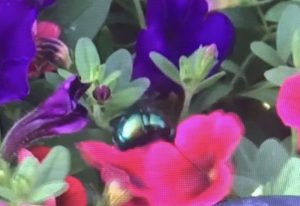 Dear ?,
We are very thrilled to have received your query with a Facebook image of Lasia purpurata, a Small Headed Fly in the family Acroceridae.  This is the fourth submission of this species we have received, the first being in 2005 and that sighting of this rare species with a limited range caused quite a stir.  We have always been amused that this species, which always appears and is described as being green, is commonly called the Purple Small Headed Fly.  That common name is used on the Arthropod Museum where it states:  “In 1933, Harvard University entomologist Joseph Bequaert described Lasia purpurata from a large, pilose, metallic blue fly with strong purple reflections that was collected in Oklahoma. Adults are often found feeding on nectar with their long proboscides inserted in flowers of butterfly weed, Asclepias tuberosa. This species is now known to occur also in Arkansas and Texas. While little is known of the biology of this particular species, we do have some understanding of general family biology. Larvae of all biologically known species are internal parasitoids of spiders. Large numbers of eggs are deposited in the vicinity of host spiders. Most species have planidium-like first instar larvae, that is to say they are strongly sclerotized and have spine-like locomotory processes. These young larvae are capable of crawling and jumping in search of spider hosts. Upon finding hosts they burrow though the integument and migrate to the spiders’ book lungs, where they can breathe outside air as they remain in diapause for several months to several years. Larvae of the subfamily Panopinae, to which Lasia belongs, have long second stadia and 4-5 day third stadia. In 1958, William Baerg, retired head of the Department of Entomology at the University of Arkansas and world renowned tarantula expert, reported that acrocerid flies, probably Lasia purpurata, sometimes attack Arkansas tarantulas. Female tarantulas produced 4-6 of these dipterous parasites. The parasites emerged from the tarantulas’ book lungs as larvae, and the tarantulas soon died. At Pea Ridge, most tarantulas appeared to be infested. The parasites emerged from mid April to mid May.”

Thank you! Yea a little after sending this email someone found the bug on your site. Cool little find!
Jason
0