Ant Mimic Spider, but which species???

Subject:  Spider
Geographic location of the bug:  Los Angeles, California, USA
Date: 05/04/2019
Time: 02:21 AM EDT
Your letter to the bugman:  I found this spider on the wall of our house- outside. It’s May 4th (May the 4th be with you.)
How you want your letter signed:  Allison 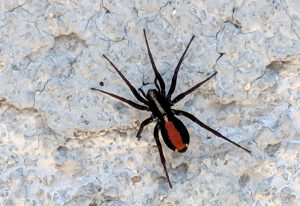 Dear Allison,
This is a harmless Ant Mimic Spider in the genus Castianeira, and it is most likely Castianeira occidens, which is native to Southern California and which is pictured on both BugGuide and the Natural History of Orange County.  We do have our doubts as its markings more closely resemble Castianeira crocata , which is pictured on BugGuide, and also the Red Spotted Ant Mimic Spider, Castianeira descripta, which is also pictured on BugGuide, but both of those are eastern species.  It is not entirely impossible that one of the eastern species might have been introduced to Southern California.  The species identification confusion is also noted on BugGuide where it states:  “The following ID tips come from Reiskind, 1969. Corresponding page numbers are listed below. …  The next group is C. crocata (pg. 200), C. descripta (pg.208), C. occidens (pg.211) & C. floridana (pg.201). C. occidens can be separated from the other two by the white stripe on the carapace. At this point we aren’t sure we can separate C. crocata & C. descripta. It’s possible that the red mark goes all the way to the rear in C. descripta and stops short in C. crocata. Also, males of C. descripta have ‘some white hairs at the posterior end’. C. floridana is easier to separate because it’s only found in peninsular Florida, but range may overlap with C. descripta.”