Subject:  Be? Fly?
Geographic location of the bug:  Oroville California
Date: 04/30/2019
Time: 08:36 PM EDT
Your letter to the bugman:  What is this insect? Bug? I found this on my bush today.
How you want your letter signed:  Sharry 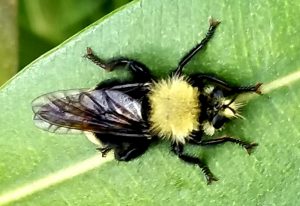 Dear Sharry,
This is a Bee-Like Robber Fly in the genus Laphria, and there are two similar looking species found in California.  We believe you encountered Laphria sackeni which is pictured on BugGuide and which flies from April to July, though we would not rule out that it might be the similar looking Laphria astur, which is also pictured on BugGuide and which has a similar flight season.

Hi Daniel, thank you so much for identifying the robber fly. I noticed it on my white  flowering Oleander  bush today.  From a distance I thought it was a black bumble bee, a small one. However when I got closer to take a picture of it  it was obviously not a black bumble bee . It has kind of a cute face  but very strange-looking .
Why do they call it the robber fly?
Hello again Sharry,
Robber Flies are predators in the family Asilidae, and according to BugGuide, they are also known as Assassin Flies, which might be a more appropriate common name.  Both common names probably arise from their stealth hunting tactics.  The etymological origin of the name Robber Fly is uncertain, however, they are not really robbing anything except perhaps robbing its prey of life.  According to Galveston County Master Gardeners site:  “Robber flies are among the few insects that catch their prey in mid-flight. An individual establishes a perch zone. From there, it swoops out to snatch the unsuspecting victim that is often larger than its aggressor and may even include spiders, large predatory insects, and, sometimes, other robber flies.”
1