Subject:  Great Peacock moth
Geographic location of the bug:  Conflans-Sainte-Honorine, 78700, France
Date: 04/24/2019
Time: 04:47 AM EDT
Your letter to the bugman:  As per my message on the forum. Thank you very much for checking it out.
How you want your letter signed:  Jane 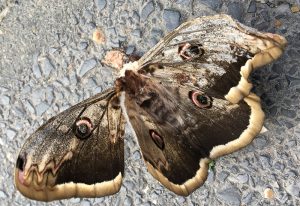 Hi Jane,
Thanks for sending in your tragic images of a female Great Peacock Moth, Saturnia pyri, that has become a roadkill victim.  The comment you placed on one of our prior postings reads:  “This is not for the faint-hearted I’m afraid, but I’ve just taken a couple of photos of a massive, and magnificent, but unfortunately dead moth I just found on the road. I’m 100% sure it’s a Great Peacock moth, but I seem to live much further North of their reported range.”  According to Saturniidae of the Western Palaearctic, the Great Peacock Moth is:  “Limited to the warmer areas of Europe and the Near East, from Paris, France (Leraut, 2017), south through western Switzerland, the Iberian Peninsular to costal regions of Morocco and Algeria. Thence eastwards across Austria, Hungary, the Balkans to the Ukraine. From here it extends southwards across the Caucasus Mountains, the Republic of Georgia, Armenia, and Azerbaijan (Zolotuhin, Didmanidze & Petrov, 2011) to Turkey, Syria, Lebanon, Israel and the Alborz and Zagros Mountains of Iran. It is also found on the Mediterranean islands of Corsica and Sardinia, but not Crete.  It now appears to be extinct in northern France (north of Paris), Germany and Luxembourg.”  Its presence might be due to a reintroduction effort, or perhaps global warming is causing it to expand its range into regions from which it had been previously extirpated. 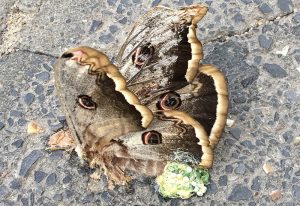 Hello Daniel
Thank you for taking the time to respond to my message, and confirming my identification.
I’ll try to find a local wildlife group/entomologist as I think it may be of interest to them. Such a pity the poor thing was dead, but at least I’ve been able to report the sighting.
Thanks again for your kind help.
Best regards
Jane