Subject:  Unknown Bug
Geographic location of the bug:  California Coastal
Date: 02/16/2019
Time: 12:26 PM EDT
Your letter to the bugman:  Hi,
I keep finding these bugs dead on my floor. I opened some boxes from overseas so that my be where they came from.
How you want your letter signed:  Simon 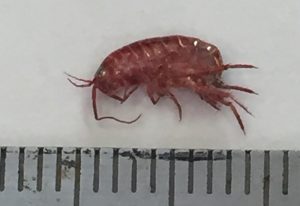 Dear Simon,
You are correct that this Terrestrial Amphipod, commonly called a Lawn Shrimp or House Hopper, is from oversees, however, we do not believe it came from your boxes.  Lawn Shrimp have been reported in Southern California for many years.  According to BugGuide, their range is “Southeastern Australia (New South Wales and Victoria), as well as nearby areas of the Pacific, but introduced into New Zealand, the British Isles, Florida and California” and “Non-native; introduced probably from Australia along with blue-gum eucalyptus trees in the 1800s. First recorded in San Francisco, CA in 1967.”  They are not usually noticed until we have soaking rains and they seek shelter from the water-soaked ground.  BugGuide notes:  “These are rarely seen except when flooding or lack of moisture forces them to abandon their home in the soil in search for suitable conditions. At such times they often end up dieing on pavement or in homes and become a nuisance. Once they start appearing, there’s not much that can be done except to sweep them up- pesticides are pointless, bcause by then they’re already dying or dead.”