Subject:  I’ve never seen anything like this bug
Geographic location of the bug:  McKinney Texas
Date: 01/07/2019
Time: 04:23 PM EDT
Your letter to the bugman:  I found this bug when working on my foundation. I thought it was a tool at first, I put it on my workbench outside. This AM when I started working outside I found it again and wondered how it fell off the bench and made it that far away. I put it back on the bench and got back to work, about an hour later I saw it moving… a lot. I put it back where I got it from. I had that thing close to my face, smelled it and everything…. gave me the creeps after I found out it was a bug. If you look at it closely the little pattern resembled a decoration you might find on an older tool’s handle.
How you want your letter signed:  Paul in McKinney 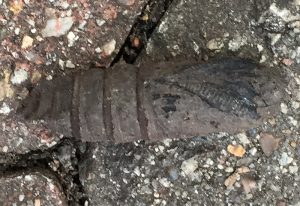 Dear Paul,
This is a moth Pupa, the intermediate state between the caterpillar and the adult during which time metamorphosis occurs.  Large moth pupae found underground are generally members of two families:  Sphingidae the Sphinx Moths and Saturniidae the Giant Silkmoths.  We believe your pupa is a member of the latter family, but we cannot provide an exact species identification.  We do not believe it is an Imperial Moth or Regal Moth because it differs from these individuals posted to our site.  Most members of the family found in Texas build a cocoon, but a number of species form a naked pupa underground like the one you discovered.