Subject:  Mating California Mantids at our porch light
Geographic location of the bug:  Mount Washington, Los Angeles, CA
Date: 09/28/2018
Time: 11:30 PM PDT
Daniel was up late sitting in the kitchen when a large Walnut Underwing caused him to go outside with the camera.  There has been a female California Mantid at the porch light for a few weeks now, and she has been getting fat eating moths and other insects that are attracted to the light.  Well, seems she attracted a mate, and true to her expected behavior, she bit off his head to ensure their coupling would be successful.  The next morning, the corpse was gone.  Did she finish her meal as a post-coital snack?  The female California Mantid living at the porch light last season was not so lucky.  Daniel is thinking of moving her to the plum trees where she will have numerous choices where to lay her oothecae. 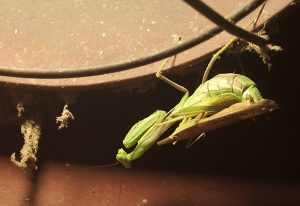 Update:  September 29, 2018
Daniel did move the Mantis to the plum trees with the hope she will lay her oothecae there.

California Mantis eats Monarch and bites off head of her paramour