Subject:  What is this bug?
Geographic location of the bug:  Rocky Mountains, Colorado
Date: 08/12/2018
Time: 04:48 PM EDT
Your letter to the bugman:  I saw a lot of these bugs while hiking a 14,000+ elevation mountain. They seemed to only be above treeline. The photo was taken in August.
How you want your letter signed:  Jennifer 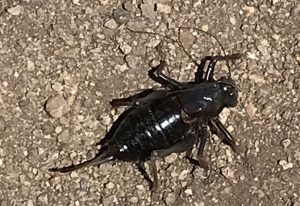 Dear Jennifer,
This is the third posting we have made this week of a Mormon Cricket sighting.  The first was a male that was part of a swarm in Nevada and the second a solitary female in Idaho.  The ovipositor indicates your individual is also a female.  According to BugGuide:  “Though flightless, this species can form migratory swarms or ‘bands’ that travel on foot, eating almost anything (both plant and sometimes small animal) in their paths, and have been significantly destructive to rangeland and crops at times. Swarming occurs primarily in the Wyoming Basin, Colorado Plateaus, Great Basin, and Columbia Plateau. In the Sierras, Rockies, and other higher mountain areas, and on the northern Great Plains, individuals average smaller, are usually non-migratory, and coloring is commonly of lighter colors (often tan or green). Individuals in bands are most commonly of a deep brown, often nearly black color.”  Can you estimate the numbers?

Thank you! There seemed to be a lot! Just about every few steps I took, there were two to three hopping across or resting on the trail. We heard what sounded like crickets, and by the sounds, there were hundreds!
0