Correction: The Magpie from the UK

Subject:  Moth?
Geographic location of the bug:  Nottingham
Date: 07/22/2018
Time: 04:54 PM EDT
Your letter to the bugman:  Please can you tell me what this is?
How you want your letter signed:  Elaine 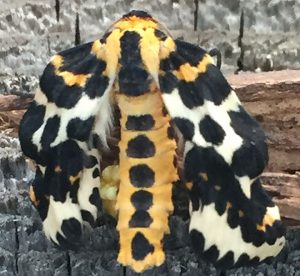 Dear Elaine,
The nonspecific response is that this is a Tiger Moth in the subfamily Arctiinae, and it is freshly eclosed which means it has recently emerged from its pupal stage and its wings have not yet fully expanded and hardened, which is making our ability to identify it more difficult.  It most closely resembles a Garden Tiger Moth, Arctia caja, as pictured on UK Moths where it states:  “Another species which was a favourite with early collectors, who selectively bred it to create unusual colours and forms.  Once a quite common moth in most of Britain, it seems to have declined in many places in the last few years.  It flies in July and August, and will regularly visit the light-trap.”  We would even entertain the possibility that a modern breeder might be releasing some “unusual colours and forms” back into the wild in an effort to help remedy that they “have declined in many places in the last few years” but the markings on the thoracic region as well as the scalloped wing edge eliminate the Garden Tiger Moth as the proper identification.  The only other Tiger Moth profiled on UK Moths that it resembles is the Cream-Spot Tiger Moth, Arctia villica, but in that species, the spots are white on a dark ground while your moth has dark spots on a white ground.  We are going to contact Arctiid expert Julian Donahue to get his opinion.

Dear Daniel
Thank you for looking into the moth that I saw it will be interesting to hear what your expert has to say. The moth wasn’t really moving and I got very close to it and moved it on it’s stick to photograph, I expected it to fly away but it stayed in the same place.
Thanks.
Elaine
Correction Courtesy of Julian Donahue:
Easy to be fooled by a colourful (since it’s British) un-expanded moth, isn’t it?
This is The Magpie, Abraxas grossulariata (Geometridae).
More images here:
https://tinyurl.com/ycmftt62
All the best,

We had a bout of deja vú because according to UK Moths:  “A very distinctive species, this was a favourite with early collectors, who used to breed it to obtain unusual coloured and patterned forms.  Quite common in most of Britain, though less so in Scotland. … The moths fly in July and August and are regularly attracted to light.”
0