Black and Yellow Longhorn from the UK

Subject:  Black and yellow bug
Geographic location of the bug:  woodland, near Worcester,  uk
Date: 06/25/2018
Time: 06:21 AM EDT
Your letter to the bugman:  I’ve searched through photos on  uk bug ID websites but still haven’t found this one!
Can you help please?
How you want your letter signed:  Pippa 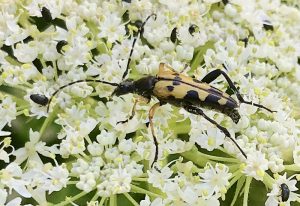 Dear Pippa,
You had most of the common name for this Longhorn Beetle in the family Cerambycidae in your subject line.  Called the Black and Yellow Longhorn according to UK Safari where it states:  “Rutpela maculata is also commonly known as the ‘black and yellow longhorn’ for obvious reasons. It can be identified by its tapered wing casings which feature four black bands that are complete at the rear end but are broken nearer the thorax.  The four front legs are yellow with black tips.  The hind legs are mostly black.  This species is nearly always spotted feeding on nectar on flower heads such as hogweed or cow parsley.  The larvae feed on rotting tree stumps, especially birch and pine.”  Encyclopedia of Life uses the common name Spotted Longhorn which is also quite descriptive.  According to Nature Spot:  “Common and widespread in England and Wales, much less common further north.”

Wow!   That’s amazing – What service!  Thank you so much
I am a wiser woman!