Subject:  Mexican bean beetle
Geographic location of the bug:  Louisiana
Date: 06/22/2018
Time: 04:58 PM EDT
Your letter to the bugman:  I’ve lost my squash crops due to these fellows, which I didn’t realize were harmful at first. I’ve pulled out the squash, but now I’ve found one on my cherry tomato plant (the plant has gotten quite big and is in very close proximity to where the squash were). I thought at first that they were squash beetles, but now I’m pretty sure they’re Mexican bean beetles, and I don’t want to lose my tomatoes.
How you want your letter signed:  Andrea 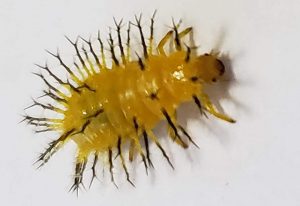 Dear Andrea,
After you commented on a posting to our site of a Squash Lady Beetle larva indicating you thought it was misidentified, you stated you were certain your identification of a Mexican Bean Beetle was correct since you also had images of the adult.  Your adult image lack critical sharpness, however the size of the spots causes us to believe that you too are being troubled by Squash Lady Beetles, Epilachna borealis, based on images posted to BugGuide where it states that the Mexican Bean Beetle “E. varivestis has smaller markings and two spots in the third row of elytral markings, not one.”  According to Insect Identification:  “Squash Lady Beetles feed on the leaves of plants in the squash family. This includes summer squash, zucchini, cucumbers. They also eat bean and pea plants, making them a nuisance in the garden. They are easy to identify if you are already familiar with the dome-like shape of other Lady Beetles. Squash Lady Beetles are yellow with black spots on both the elytra (wing covering) and the thorax. They are slightly larger than other, beneficial Lady Beetles. They may be mistaken for Spotted Cucumber Beetles because of the similar color and spots. (The body shape is different though: the Spotted Cucumber Beetle has a long, flat body.)”  There are additional images and information on MOBugs.  Walter Reeves notes:  “Note that there is a similar insect called the Mexican bean beetle. This insect has 8 spots on each wing cover rather than the 7 you see here.” 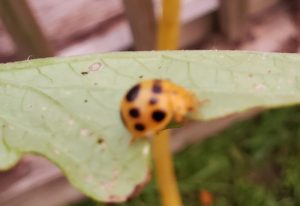 Okay, thank you. I found a better picture (which you can use on the site if you’d like). I’ve attached it. You may need to zoom in, but it is more clear. Thanks again.
Best,
Andrea 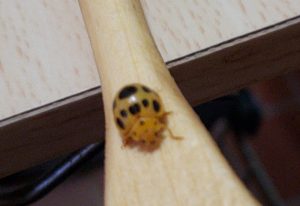