Subject:  Big Ants
Geographic location of the bug:  New Mexico
Date: 04/10/2018
Time: 02:03 PM EDT
Your letter to the bugman:  I discovered these large ants under a  paver where they had their nursery in the front yard. I haven’t seen them anywhere else. I was wondering if they were some sort of harvester ant?
How you want your letter signed:  Thanks, Karen 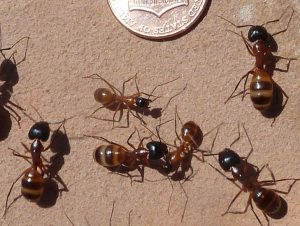 Dear Karen,
These are Carpenter Ants in the genus Camponotus, and the individuals with the big heads are the major workers, but we are not certain of the species.  Here is a BugGuide image of a major worker of Camponotus sansabeanus and here is a BugGuide image of another major worker from a different species.  Here is another BugGuide image of a group of Carpenter Ants from New Mexico that are not identified to the species level.  Ant colonies often have numerous castes and here is an explanation from AntArk:  “Soldier ants are also known as major workers or big heads. They are only present among certain ant species that are ‘polymorphic’.  These sterile female ants are larger and stronger than typical workers. They protect their colony from large predators and use their strength and large jaws or mandibles  to cut and carry … larger objects.  In harvester ant species, the soldiers use their strength to crack open hard seeds.  In leaf cutter ant species, the soldiers cut through the thicker plants so that the minor workers can carry the clippings back to their nest.  Some species have median workers that are sized between minor and major workers.”  Carpenter Ants do not eat wood, and according to BugGuide:  “Camponotus species are often called ‘carpenter ants’ because many species nest in dry or moist rotten wood, and some may nest in wooden houses, sheds, etc. However, in the East, C. americanus and C. castaneus nest in soil, and in the West, numerous species (except most in the subgenera Camponotus and Myrmentoma) nest in soil.”  In our opinion, the colony you uncovered does not pose a threat to you or your home.  Though we do not endorse extermination, the Orkin site has some good information as well, including “A typical parent colony contains a queen, the queen’s brood and workers, both minor and major. The size of worker ants determines their responsibilities. Minor workers are the smallest members of the colony, and their tasks are to take care of the young and forage for food. Major workers are larger and serve as soldiers to defend against predators.”  Your image illustrates two different castes of workers.

A Reader Comments:   “I’m sure you’ve heard about this by now. In this posting, “Carpenter Ants, On April 12, 2018 · Category: Ants · Add Comment”, this phrase appeared. “They protect their colony from large predators and use their strength and large jaws or mandibles  to cut and carry buy generic tramadol online larger objects.” I had to read the line 3 or 4 times before it sunk in. I just kept thinking, “What does that say? What’s wrong with this?”! Hard to believe this can happen to a website!!! Take care, have a good one! Cathy”

Ed. Note:  Thanks to Cathy for bringing that to our attention.

I discovered more things about the “Tramadol” line, and now I’m more confused than ever. I went and copied the article and pasted it to Word Pad. The phrase showed up. Then I got the ant website e-mail and was going to tell them about it. When I copied and pasted the article to send to them on my g-mail, nothing showed! I scrapped the e-mail and started to worry what my computer may have caught. I ran Avast and Malwarebytes, and neither found anything! I saw you were able to delete the phrase. Probably always going to be a mystery, and apparently, no harm, no foul. Hope all is well on your end. Thanks, Cathy

We are very happy you contacted us Cathy.  When the AntArk quote was originally read on their site, the ghost link did not appear and Daniel did not review the pasted text, though he did delete all links, so he suspects though the active link was deleted, the url information somehow remained and showed as the strange Tramadol citation.