Subject:  Teneb captives
Geographic location of the bug:  CA
Date: 01/25/2018
Time: 02:10 PM EDT
Your letter to the bugman:  Ah, the power of food! Insects lose much fear of man in this state.
The shinier teneb is Coniontis, and despite being only 10 mm long it has been alive since summer, when I rescued it. I am currently trying to record its mysterious vibratory song, which has never been done before.
The duller one did not come from the local area, and identity is unknown.
PS: I’ve attached a bonus pic of the pet Cotinis dozing on top of its meal
How you want your letter signed:  AlexW, extreme entomophile 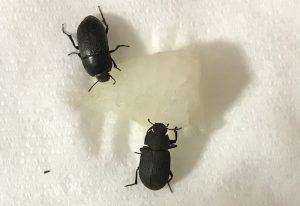 Dear Alex,
Thanks for sending us an image of your captive Darkling Beetles.  Eric Eaton once told us that if we are ever having trouble identifying a Beetle, it is most likely a Darkling Beetle.  Good luck with the sound recording.  The song to which you refer is a result of stridulation, or producing sound by rubbing body parts together, which no doubt you already know, but we write it for the benefit of our readership.

Hello Daniel, I have one more minor nit to pick. I forgot to include that the Coniontis’s song consists of a short spurt of vibrating the body against substrate, and thus “stridulation” may not be the right term. I affectionately call my Coniontis the “tok-tok of Los Angeles” for this reason =)