Subject:  Hatchling California Mantis
Geographic Location of the bug:  Mount Washington, Los Angeles, CA
Date:  Monday, January 22, 2018
Time:  4:30 PM PST
This past Monday, while taking an unrelated photo of a model using a 4×5 camera and film, Daniel spotted a hatchling California Mantis on the patio roof.  It was scuttling along quite quickly and without a digital camera handy, the sighting went unrecorded.  The proximity of this sighting to the body of the female California Mantis that died without laying eggs has only fueled Daniel’s unrealistic hope that some eggs might hatch, protected by the body of their dead mother.  Though that is a remote fantasy, this is nonetheless an extremely early sighting for a Mantis hatchling in Southern California as we don’t normally see hatchlings until April, but this has been a warm and dry Southern California winter thusfar.  Lacking an image of the hatchling, we are posting a scanned photo from a 4×5 negative of the final resting place (an empty aquarium) of our female California Mantis that died after an unknown trauma caused her egg-filled abdomen to burst.  Meanwhile we will search for more hatchlings in the coming weeks. 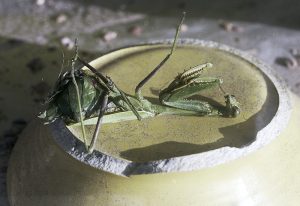