Subject:  Inside a European Paper Wasp nest
Geographic location of the bug:  Tonasket, WA
Date: 01/22/2018
Time: 11:00 AM EDT
Your letter to the bugman:  I think I can only send one picture at a time.  There’s 3.
At the end of the hatching season, these1/2 dozen or so had a hole chewed in the top of their egg cell. None of the earlier eggs had this done to them. Don’t know if it was the baby or their mates that did it. About 2 weeks later the wasp emerged the same way as all the rest, by chewing the cap off from the inside and flipping it back like a Pez dispenser. They were next to my garden, and I had absolutely no bugs. Not good ones or bad ones. They are also very calm. I took tons of pictures and the only time they got excited was when the wind blew my hair into their nest. They didn’t chase me very far… lol. I know they eat the good as well as the bad, but that’s just nature. My moral dilemma here, is I know they are an invasive species. Any thoughts on whether or not they should be destroyed?
How you want your letter signed:  Cathy 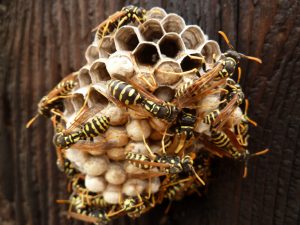 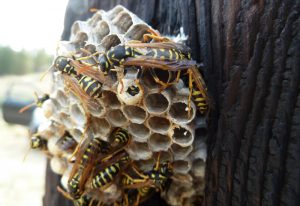 This is on 8-15-17, and I’m sending it because it looks like it has moved in there. I’m really  close, 3 or 4 inches and on macro. Sorry it’s still blurred. None of the wasps cared I was there. It hatched a couple of days later. 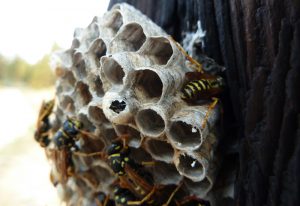 Dear Cathy,
Thanks for sending in your images of the activity in a European Paper Wasp Nest.  According to BugGuide:  “First reported in North America in 1978 near Boston, MA” and “Replacing native wasps in some areas.”  According to Colorado State University Extension:  “The European paper wasp has already largely replaced the native species in much of the region. Some reasons for the competitive advantage to P. dominulus over our native paper wasps include:

European Paper Wasp in the Snow in January!!!