Jewel Beetle from Tanzania may be Steraspis speciosa

Subject:  Jewel Beetle Tanzania
Geographic location of the bug:  West Kilimanjaro, Tanzania
Date: 01/14/2018
Time: 05:36 PM EDT
Your letter to the bugman:  Could you tell me what species as well as common name this is?
How you want your letter signed:  Doug 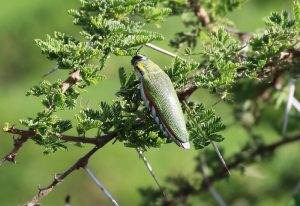 Dear Doug,
We believe we can identify your beetle as a member of the genus Steraspis.  Our first clue is this image from Zimbabwe posted to FlickR that is identified only as Steraspis species.  We have a similar looking Jewel Beetle from Jordan which we identified as Steraspis squamosa.  We found a mention in the online book “Forest Entomology in East Africa:  Forest Insects of Tanzania” that includes a mention of Steraspis speciosa fastuosa stating “This borer was observed gumming eggs onto the bark of Elaeodendron and Cassia fistula and larvae were boring directly into the wood causing much exudation of gums in the former.”  We searched for images of Steraspis speciosa fastuosa and found this Facebook posting from Insect Art of collected individuals and the note that “they weren’t nearly as metallic as the ones I get from this guy in Africa.”  We found a posting on jcringerbach.free of Steraspis squamosa that looks very similar, but the range is listed as “Sahara north of Sahel from Red Sea to Mauritania. Algeria, Morocco, Fazzan, Egypt, Syria” so it makes sense that a similar looking member of the genus might be found in sub-Saharan Africa.  Jcringenbach.free also has images of Steraspis speciosa and the range is listed as “Saharan Algeria and Morocco, Fazzan, Egypt, Arabia and tropical Africa to Mozambic” and since Mozambique is south of Tanzania, we presume it is part of the range.  The food plants listed are “Acacia nilotica and tortilis” and the plant in your image looks like an Acacia.  So we are relatively confident your beetle is in the genus Steraspis, and it might be Steraspis speciosa, and there is no common name we could locate except the general family name of Jewel Beetle.