Emperor Butterfly from China What ate the Diving Beetle???

Subject:  Blue colored bug
Geographic location of the bug:  Holly, MI
Date: 09/10/2017
Time: 09:44 PM EDT
I found this little guy between the glass and screen on my front storm door. My first thought was a bee, till I noticed it was a beautiful blue. Can you tell me what it is?
How you want your letter signed:  Patti 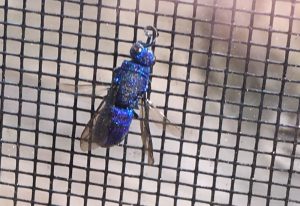 Dear Patti,
This is a Cuckoo Wasp in the family Chrysididae.  According to BugGuide:  “The name ‘cuckoo wasp’ refers to the fact that these wasps lay eggs in the nests of unsuspecting hosts.”  BugGuide also states:  “Most species are external parasites of wasp and bee larvae; one subfamily (Cleptinae, one genus, Cleptes) attacks sawfly larvae, another subfamily (Amiseginae) the eggs of walkingsticks” and “Some species are parasitoids and others cleptoparasites. Either way the host larva dies.”  Though the female Cuckoo Wasp often has a very pronounced ovipositor, Cuckoo Wasps are incapable of stinging.