What is the Hickory Horned Devil doing on a Hydrangea???

Subject:  What is this??
Geographic location of the bug:  Charleston, WV
Date: 09/06/2017
Time: 08:28 PM EDT
Just want to know what this crazy thing is. It’s in a hydrangea shrub.
How you want your letter signed:  Cynthia

Dear Cynthia,
Is there a nut tree near the hydrangea???  This is a Hickory Horned Devil, one of the most distinctive looking North American caterpillars.  Early instars are brown, but as the caterpillars grow and molt, they eventually become spectacular, enormous caterpillars that are green, aqua and red, making the Hickory Horned Devil the largest North American caterpillar.  We have never heard of them feeding on hydrangea, so we suspect this individual was dislodged from a more typical food plant and is crawling around to find something to eat.  If there is a nut tree nearby, you should relocate it so it can continue to feed and eventually mature.  According to BugGuide:  “Larvae feed on leaves of ash, burning bush, butternut, cotton, gum, hickory, lilac, pecan, persimmon, sumac, sycamore, and walnut” and if it is really feeding on the hydrangea, that would be an additional food plant.  The adult Royal Walnut Moth it will eventually become is equally spectacular.

Update:  September 17, 2017
It is eating the hydrangea. There are not any nut trees nearby, except for huge oak trees.  There is a second one in another hydrangea on the other side of the porch.

Hi Daniel,
I just wanted to share a couple more photos of the caterpillars I inquired about. My mother actually discovered a second one in another hydrangea bush. They have none of the trees you listed nearby, so were not able to relocate them. However, both are eating, growing and changing colors in the hydrangeas.
Cynthia 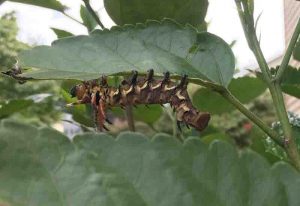 Thanks for the update Cynthia. We have not been able to locate any additional information on Hickory Horned Devils eating leaves from hydrangea.