Subject:  Cicada Killer Wasp?
Geographic location of the bug:  Thurmont, MD
August 26, 2017 7:21 AM
We have a large number of very large bees hanging around our lilac tree. I think they might be cicada killers, but I’m not positive. They also seem to be eating/drinking something from the branches of the tree. Maybe sap? I just wanted to be sure they are the nonaggressive wasps and not something we should worry about right next to our front porch. Also, will they kill the tree?
Signature:  Joan Hertel 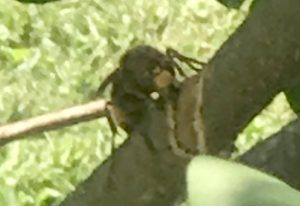 Dear Joan,
This is NOT a Cicada Killer, but a European Hornet.  We have gotten reports in the past of European Hornets stripping bark off lilac bushes.  European Hornets are social wasps that construct a nest from paper pulp that they manufacture by chewing bark.  According to BugGuide the habitat is:  “Woodlands. Paper nest is built in hollow trees, or in human structures such as attics. Adults come to lights” and “Predatory on other insects, used to feed young. Also girdle twigs to drink sap.”  Social Wasps will defend a nest by stinging, but to the best of our knowledge, European Hornets are not considered aggressive. 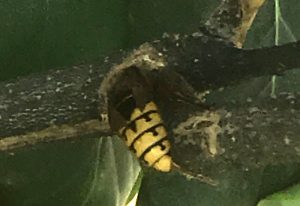 Daniel,
Thank you so much for the quick reply! I’m glad I asked you as my husband mows under that bush and has disturbed them, but no stings so far. Is there something we could use on the lilac to discourage them from stripping the bark? I don’t want to kill them as long as they aren’t in my attic, but I’d like them to leave my lilac alive and uninjured.
Thank you!
Joan
Sorry Joan,
We do not know how to discourage them from stripping bark from your lilac, but we don’t believe their actions will have a lasting negative effect on the health of the plant.
0

Our Favorite Letter of the day: Aerial Yellowjackets nest in mausoleum!!!

One Response to European Hornet