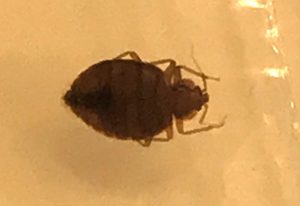 We have a hunch you already suspect this is a Bed Bug.  You might find the History of Bed Bugs page helpful.  The site begins with this fascinating introduction:  “It is thought that C. lecturlarius may have actually originated in the Middle East, in caves that were inhabited by humans as well as bats. The lineages of the bed bug can be traced by their name as well. In ancient Rome, they were called Cimex, meaning ‘bug’, the species designation lecturlarius refers to a couch or bed.  They are ancient insects and they have lived off hosts since time began. Studies have suggested that they parasitized bats first and then moved on to humans. The bugs inhabited the same caves where civilization began.”