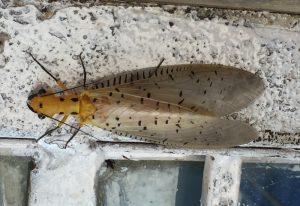 Dear Celeste,
This is really a gorgeous yellow Dobsonfly, and we believe it is the same as this Dobsonfly from Burma that we identified as Nevromus austroindicus.  According to the Aranyaparva blog:  “a dobsonfly Nevromus austroindicus. Very few people have seen this insect. In fact, they gave it a name and formally described it as recently as in 2012! The specimen was from Karnataka. Shyamal has described it as a living fossil in his blog. The males have spectacularly long, tusk-like intimidating mandibles. This is a classic case of how looks can be deceptive. Although these pincers are long, they are weak and help only during the mating season; to fight away other males and to impress the females. The females, like the one we saw, have short, sharp pincers. If we try to mess around with them, we must also brace ourselves to lose some blood”  and  “Very little is known about this Western Ghats species Nevromus austroindicus. The fact that it has been described so late shows the lack of information about it.”

Thanks Daniel!  I do a type of hand embroidery called Stumpwork and bugs are one of the things that I like to make.  And as an added challenge, I like to do ones that I find when we travel.
Celeste

How wonderful.  Please send us some images if you can.