Subject: What kind of moth?
Location: South Central WI
July 27, 2017 3:10 pm
Photo from Blue Mounds, WI. Any idea what type of moth this is? It’s a beauty!
Signature: Thom 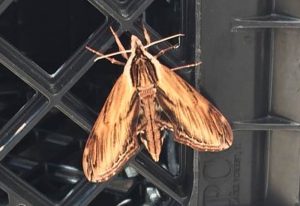 Dear Thom,
Based on this BugGuide image, we believe you sighted a Laurel Sphinx.  Also known as the Fawn Sphinx, BugGuide states:  “this species was long known as the Laurel Sphinx because the specific epithet was mistakenly thought to refer to the host genus Kalmia (Laurel)” and “Named in honor of botanist Pehr (Peter) Kalm (1716 – 1779), one of the most important apostles of Carl Linnaeus.”  The actual food plants posted on BugGuide are:  “Ash, fringe-tree, lilac, privet, and plants in the olive family (Oleaceae).”  Sphingidae of the Americas provides this explanation for the name:  “The species name ‘kalmiae‘ probably originates from Pehr Kalm, an 18th century Swedish naturalist. ‘Kalmia‘ is the genus name for various laurels. Moths may have been seen nectaring at the flowers, or the golden colour of the forewings might have suggested the ‘laurel wreathe’ used to honour ‘gold medalists’.”  The Laurel Sphinx Caterpillar is also quite impressive.