Subject:  Will this Grasshopper eat my buds?
Location:  Mount Washington, Los Angeles, California
July 19, 2017
Thanks Bugman, for identifying my young Gray Bird Grasshopper.  It is still living on my woody plant and it is growing larger, but now I am worried that it might eat the buds forming on my plant.  Do grasshoppers just eat leaves or will they eat other parts of the plants?
Signed:  Constant Gardener 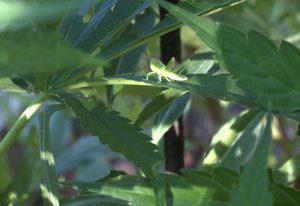 Dear Constant Gardener,
According to BugGuide, the Gray Bird Grasshopper, Schistocerca nitens, will eat “Apparently a wide variety of plants.”  We also looked at what BugGuide has to say about the genus and we learned:  “The locust of the biblical plagues (well-known and dreaded throughout the Middle East and Europe in ancient times) is the only Old World member of this genus, Schistocerca gregaria (Song, 2004). North American species are much less prone to swarming behavior.”  According to Charles Hogue in Insects of the Los Angeles Basin:  “The light green nymphs attain noticeable size in late summer.  Both stages feed on various garden crops and ornamentals.”  We are relatively confident that a Grasshopper feeding on leaves may continue to eat if presented with buds.  If you are concerned about the flower production of this plant, as we stated in an earlier posting, you should consider relocating this young nymph.  Luckily you do not need to worry about a plague of locusts descending on your crops, but a large Gray Bird Grasshopper might noticeably affect your yield.