Subject: I was wondering what this was
Location: Central Scotland
July 1, 2017 6:09 am
Hello
We were trying to find out what this was. We had thought it was somekind of hoverfly but we have never seen one so big.
Signature: Best wishes, Dawn 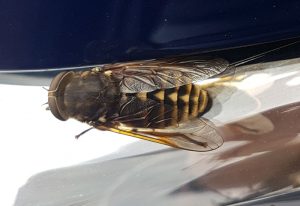 Dear Dawn,
This is a female Horse Fly, Tabanus sudeticus, and we just posted images of a male.  Only female Horse Flies are blood-sucking biters, and they can be distinguished quickly from males by the spacing between their eyes.  Males do not have a space between their eyes.  According to Influential Points, the common name for this species is Dark Giant Horse Fly and the site states:  “The dark giant horsefly flies in July and August and commonly feeds on the blood of cattle and ponies. In Europe … Tabanus sudeticus flies from the end of June and through July and August. Krčmar (2005)

reports that it reaches its maximum abundance in third week of July. In Britain it mainly lives in boggy areas in the north and west, although it is also quite common in the New Forest. Tabanus sudeticus is distributed widely in northern Europe into Russia.”  According to iNaturalist:  “a species of biting horse-fly. It is the heaviest fly in Europe.”  According to the Nature Net Ranger’s Blog:  “This is Tabanus sudeticus, sometimes called the dark giant horsefly. It seems, oddly enough, that this impressive insect has not really got a commonly-accepted English name. It’s referred to in one place as the “dark behemothic horsefly”: a charmingly descriptive name, albeit a little cumbersome. Yes, it’s sitting on my finger and no it didn’t bite me. They can be up to 25mm long (that’s one inch) and 50mm across the wings – a massive fly and the largest dipteran in Europe (I think it was bigger! Having measured the Ranger’s finger, the fly could’ve been at least 30mm – The Cat). Horseflies are big, fast-flying creatures, and they will bite any big mammal, including humans. The bite is very painful, and as horseflies cut the skin when they bite (rather than pierce it), horsefly bites can take a long time to heal, and can cause infection. Unlike insects which surreptitiously puncture the skin with needle-like organs, horse flies have mandibles like tiny serrated scimitars, which they use to rip and slice flesh apart.”

Hi Daniel
Thank you for getting back to me, and for your detailed description, it is very helpful.
Best wishes
Dawn
2

One Response to Dark Giant Horse Fly from Scotland