Subject: Dragonfly
Location: Gloucester VA
June 26, 2017 12:05 am
A Dragonfly I saw in my yard, pretty big, several inches across, probably about four inches wide. There are so many similar dragonflies that I cannot tell.
Signature: Kitsune 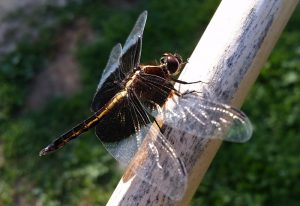 Dear Kitsune,
We have matched your image to an image of a female Widow Skimmer, Libellula luctuosa, on BugGuide.  According to BugGuide:  “Most commonly found at lakes and ponds, sometimes at streams, and sometimes well away from water.”  According to Overton Park Conservancy:  “Finally, the widow skimmer is a dragonfly that sometimes joins the large feeding swarms, but often stops to perch in the grass or on plants rather than flying continuously.  They’re named for the bands of brown-to-black markings on their wings.  Males have an extra wing of white coloring outside the black lines.  Their graceful flight is very much like a butterfly’s.”

Damselfly Naiad from the UK