Subject: Curious as to what this creature is
Location: Brandon, Manitoba, Canada
June 3, 2017 8:06 pm
Hello, I was recently at a friend’s place when this creepy fellow was spotted on the ground… managed to snap a picture of it before it noticed me and flew at my face then away. Any help being able to identify this mysterious work of art would be greatly appreciated… it looks like something out of a night mare.
Signature: Robert Boretz 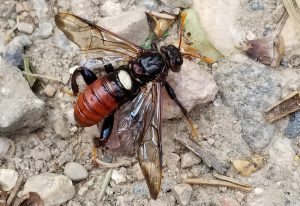 Dear Robert,
This is an Elm Sawfly, Cimbex americana, a non-stinging relative of bees and wasps.  Here is a BugGuide image for comparison.  According to BugGuide:  “not considered a forestry problem, but [larvae] can defoliate shade/ornamental elms and willows.”  Elm Sawfly larvae are frequently confused with Caterpillars.

Daniel, thank so very much for your timely and accurate response! I’ve been itching to know what that thing was since the moment I seen it. I have had horrible thoughts of it somehow wrapping it’s tiny legs around my face and sucking my brain out ( albeit not possible, but it looks like the sort of bug that would attempt it) I can rest easy now knowing that it is non stinging and has really no interest in causing harm unlike its A*hole relative the wasp. Your help identifying this little fellow is greatly appreciated, thank you for your time!
Rob
2