Subject: Scorpion type insect
Location: London
May 27, 2017 5:04 am
Hi good afternoon I have found what looks like a scorpion type insect in my back garden I am located in Hayes Middlesex London I would really appreciated if someone could identify what type it is as I have very young kids the youngest being four months old and feel a little bit nervous. I hope you can help thank you
Signature: Stephen 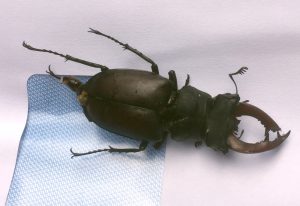 Dear Stephen,
We are very disturbed by your image of a very dead male Stag Beetle, Lucanus cervus, because indications are that it was alive when you found it.  Stag Beetles are perfectly harmless as they have neither venom nor poison, and the large mandibles of the males are not used for biting people, but rather to fight among themselves when competing for a mate.  This is considered an endangered species throughout much of Europe.  According to The Wildlife Trusts:  “Protected in the UK under the Wildlife and Countryside Act, 1981. Classified as a Priority Species in the UK Biodiversity Action Plan.”  The Wildlife Trusts also states:  “The Stag Beetle is the UK’s largest beetle and is found in south-east England, particularly in south and west London. It prefers oak woodlands, but can be found in gardens, hedgerows and parks. The larvae depend on old trees and rotting wood to live in and feed on, and can take up to six years to develop before they pupate and turn into adults. The adults have a much shorter lifespan: they emerge in May with the sole purpose of mating, and die in August once the eggs have been laid in a suitable piece of decaying wood. Look for the adults on balmy summer evenings, when the males fly in search of mates. Once the male has found a mate, he displays his famously massive, antler-like jaws to her, and uses them to fight off rival males, in a similar fashion to deer.”  According to People’s Trust for Endangered Species:  “Spectacular stag beetles are one of our largest beetles. Sadly their numbers are declining across Europe and they are now extinct in some countries. In the southern parts of the UK they are doing much better but they still need our help.”  According to UK Safari:  “Stag Beetles are the largest beetles found in the U.K. and they’re now quite rare.  The decline of our Stag Beetles is mainly as a result of habitat loss.  Some are killed by cars on roads, and since they spend such a long time in the larval stage they are also vulnerable to predation.”  According to BBC:  “One of the UK’s most iconic insects is under threat and becoming increasingly rare to find, and that’s a real shame.”  We hope the next time you encounter an unknown creature, you resist the urge to kill it because there are really very few animals in London that pose any threat to humans, and that you make an attempt to identify it before taking such an irreversible action.  We hope you teach your children to appreciate the wonders of the natural world and not to fear them.  Our mission from our inception has been to provide information to the web browsing public so that they have a better appreciation of the lower beasts.  Alas, we have no choice but to tag this posting as Unnecessary Carnage.

Thank you very much for your email it was my four-year-old son whom found it in the garden  lying upside down in that position and was already dead,  but thank you for your advice.